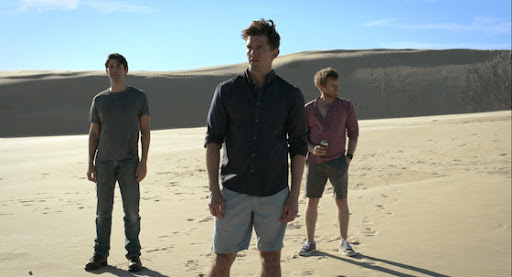 Andy (Hunter Cross), Jack (Chase Fein), and Moze (Steve Holm) are three Dartmouth college grads that have a little reunion at Andy’s cottage on Lake Michigan in Up on the Glass. Of course, things don’t go as smoothly as planned. Moze spends the entire trip either piss drunk or fighting with Andy, or both. Even as an adult, it seems like Jack and Andy have to spend a considerable amount of time babysitting him. Jack is a quiet drifter who is not only harboring a lot of anger, but pain as well. He is going from job to job and town to town, not establishing any roots. Life seems to be flying by and missing him. Then there is Andy, the most successful of the three and he makes sure they know it. On top of that, Andy is married to Liz (Chelsea Kurtz), the girl of Jack’s dreams. 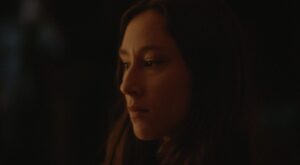 Moze has to leave early and it is only Jack and Andy left. Jack has always resented Andy for ending up with Liz. He openly wonders what his life might’ve been like if the cards fell differently. Andy can sense this and lets Jack know that life with Liz is not all sunshine and roses. This falls on deaf ears as Jack can’t imagine how it would be anything short of perfect. Andy has wandering eyes and he convinces Jack to bring home two local women from a bar, Becca (Jessica Lynn Parsons) and Kate (Nikki Brown). Andy let’s his frustrations out and sleeps with Becca, infuriating Jack. When tensions boil over, Jack can’t control himself, and he makes a decision that will affect all of their lives. 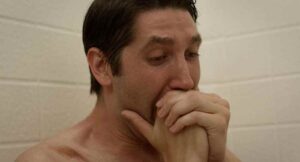 Up on the Glass doesn’t really add anything new or inventive. It’s a story we’ve seen before, only this time its just…more awkward. The dialogue and the conversations between all the characters doesn’t flow. Whether it be Andy and Moze weirdly arguing to instantly making up or Jack gracelessly trying to flirt with Liz, something is off. The interactions are not natural, and they take you out of the atmosphere the film is trying to create. I am not sure if this is due to writer/director Kevin Del Principe and writer Nikki Brown’s script or the performances themselves. Regardless of which, Up on the Glass has some pieces that could work, they just don’t fit together.

Principe tries to mix things up with some interesting shots and music to really frame a scene or moment. Principe tries to keep the tension mounting with ominous music that seems to intensify. Add in rhythmic dripping water and the booming noises of a clock ticking and that can make anyone go crazy…right? Principe really hones in on Jack unraveling with these devices and highlights the torment he is going through. However, when the dust settles, Up on the Glass is a bland “thriller” that leaves a lot to be desired. You can go ahead and pass on this one and rewatch The Talented Mr. Ripley instead.