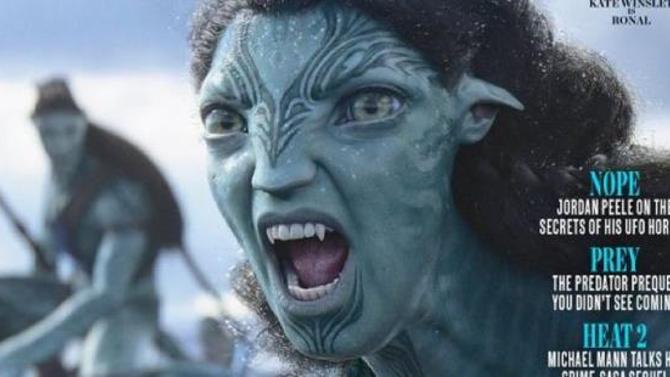 Kate Winslet has played her share of dark, depressing characters, but never has she been quite this blue. Whomp whomp. Empire Magazine has debuted our first look at Winslet in James Cameron’s sequel Avatar: The Way of Water. And she looks fierce and definitely blue as Na’vi leader, Ronal.

Ronal is co-leader of the  Metkayina tribe. In the cover image we see her, teeth bared and flying into battle. In a second photo we see Ronal standing alongside Cliff Curtis’ Tonowari.

Ready to return to Pandora? Empire’s world-exclusive #Avatar: The Way Of Water issue is coming, with Kate Winslet riding into battle as Na’vi leader Ronal on the newsstand cover. On sale Thursday 7 July.

“She is deeply loyal and a fearless leader. She is strong. A warrior. Even in the face of grave danger, and with an unborn baby on board, she still joins her people and fights for what she holds most dear. Her family and their home.”

Winslet was also sure to compare Ronal to a pair of iconic female badasses from James Cameron’s past: Linda Hamilton’s Sarah Connor, and Sigourney Weaver’s Ripley. Pretty high bar to set, but there’s a reason Cameron cast his Titanic actress for this role. Obviously, he feels she can meet the high expectations.