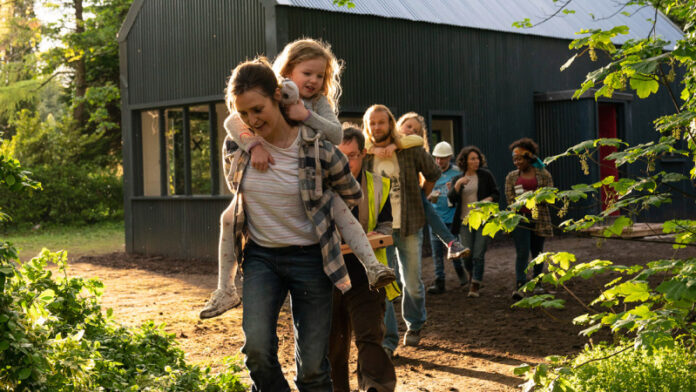 In 2011, Meryl Streep earned her third Best Actress win at the Oscars for The Iron Lady, having played British Prime Minister Margaret Thatcher. That film was directed by Phyllida Lloyd, who then vanished from the Hollywood scene for nearly a decade. But now Lloyd is back with Herself, a much smaller drama that could still make waves this awards season.

Starring and co-written by Clara Dunne, Herself is about a single mother just trying to keep it together for her two daughters, despite financial insecurities and a horrible ex. When she can’t get help from the local government, she decides to take matters into her own hands. The film also stars Harriet Walter, Conleth Hill, and Cathy Belton.

Lloyd is also the director behind 2008’s Mamma Mia!, and it’ll be interesting to see what she can do without Streep in her backpocket.

Herself opens in Irish and UK theaters on October 16th, with a stateside release to follow. It debuted earlier this year at Sundance.

SYNOPSIS: Sandra (Clare Dunne), on the surface of it, is a young Mum struggling to provide her two young daughters with a warm, safe, happy home to grow up in. Beneath the surface, Sandra has a steely determination to change their lives for the better and when it becomes clear that the local council won’t provide that home, she decides to build it herself from scratch. With very little income to speak of and no savings, Sandra must use all her ingenuity to make her ambitious dream a reality. At the same time, she must escape the grip of her possessive ex-husband and keep him away from her and her girls. The lionhearted Sandra draws together a community of friends to support her and lend a helping hand and it is the kindness and generosity of these people and the love of her young daughters that help build her own strength and sense of self. With a cast that also includes Harriet Walter and Conleth Hill, HERSELF is the outstanding new film from Phyllida Lloyd, acclaimed director of ‘The Iron Lady’ and ‘Mamma Mia!’.

‘Herself’ Trailer: A Single Mother Tries To Build A Better Future In Phyllida Lloyd’s Return Drama