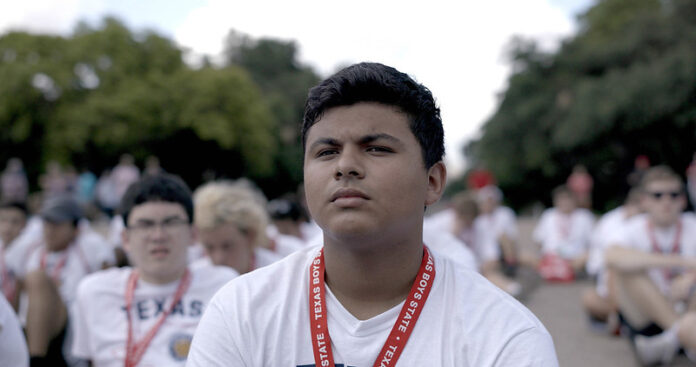 Scared for our political future? You have every right to be as this country has never been more polarized, the ideological divide never greater, and a certifiable nut voted into the White House. But there may be glimmers of hope to come, as seen in the incredible, must-watch documentary Boys State, a Sundance award-winner about a group of Texas teens attending an annual leadership conference where they attempt to build a more perfect union. In the process, they show us everything that our politics is now, and what it can under the right guidance.

Directed by Jesse Moss and Amanda McBaine (The Overnighters), Boys State examines the week-long Texas event, in which 1100 boys from across the country are brought together and left to create their own representative government.  The initial chaos of it, with kids scrambling around to collect signatures so they can run for various offices, with Governor right at the top, looks a little like the Democratic and Republican National Conferences. But eventually, it evens out into something more like a football game, with the attendees divided into two fictional political Parties: the Federalists and the Nationalists. Past participants have included future heavyweights Bill Clinton, Dick Cheney, Samuel Alito, and Corey Booker. So there’s something to attending this thing, in at least forming the kind of working relationships that matter in politics.

Moss and McBaine collected thousands of hours of footage from the 2018 event, and crafted a handful of gripping, roller-coaster stories from all across the ideological and cultural spectrum to follow. You’d be right in thinking the conference is mostly attended by white conservative Christians, which makes the diversity of the protagonists all the more intriguing. There’s Rene Otero, an African-American liberal from Chicago with a bold, “take no shit” demeanor that helps him to easily win the Nationalist chairmanship. It comes with a price, though; racist attacks mark him for impeachment almost immediately, to which he observes  “I don’t think being a fantastic politician is a compliment.”

There is no true villain in the piece, but if anybody comes close it’s his Federalist rival, Ben Feinstein. From the jump, Ben is presented as a sympathetic figure and someone we might want to root for: despite his spouting of right-wing talking points undoubtedly gained from watching too much cable TV, Ben is a double amputee who has refused to be hindered by his disability. But his life experience has also given way to a cynical “win at all cost” mentality which will be recognizable to anyone who pays attention to our current crop of elected officials.

An Obama-like hero emerges in Steven Garza, a Houston kid and the son of an undocumented worker. He immediately contrasts from his white well-to-do peers by showing up to the bus pickup all by himself; his parents too busy working to come. Steven is perhaps the most unlikely candidate running for Governor; he can barely scrounge up the necessary signatures, but a rousing speech catches on thrusts him into the limelight. Steven’s calm, everyman demeanor has him eyed as either weak or a calming influence, but it also leaves him vulnerable to xenophobic attacks from the other side. And how dare he, how dare he, be for background checks in a pro-gun state like Texas??

Arguments occasionally break out over God, guns, and abortion, with many of them reduced to standard-issue talking points and little insight. The boys all speak exactly like the talking heads we see on TV, which goes to show how our youth perceive how politics is meant to be. That was probably the most chilling aspect of Boys State for me; seeing how our poison political system has corrupted some in the next generation to believe this is the way it has always been done. A case in point is Robert Macdougall, who looks like the prototype for a can’t-lose candidate in the home of Friday Night Lights. A football standout with a handsome, All-American face, Robert is secretly less conservative than he lets on, but refuses to be honest because it’s a losing strategy.  Even as he acknowledges the harm in what he’s doing, he calculates that it’s more important to win than to not.

For the most part, these are all serious kids with big hearts who actually give a damn about politics. That is inspiring in and of itself, especially when the current generation is so often accused of sitting on their butts worrying about their Twitch follows. Of course, there are some goofball exceptions. One branch of the Nationalist’s consistently votes for secession; another group initiates a vote on pineapple pizza. Boys will be boys, after all.

Boys State captures the electric rush of a fast-moving political campaign, taking us inside the system in ways most have never, and will never, get to see. The film offers an integral look at how our government really works, and the people who will either be ironing out the kinks or gumming up the works in a few years. The conclusion could be a bit of a drag that makes you feel worse about our government, but the directors are smart to inject just enough optimism in one candidate’s honest, vulnerable display of appreciation for everything he just experienced and the people he met along the way. It’s the kind of heartfelt truth we should expect from our public servants, and Boys State leaves us hopeful that we will see it again.