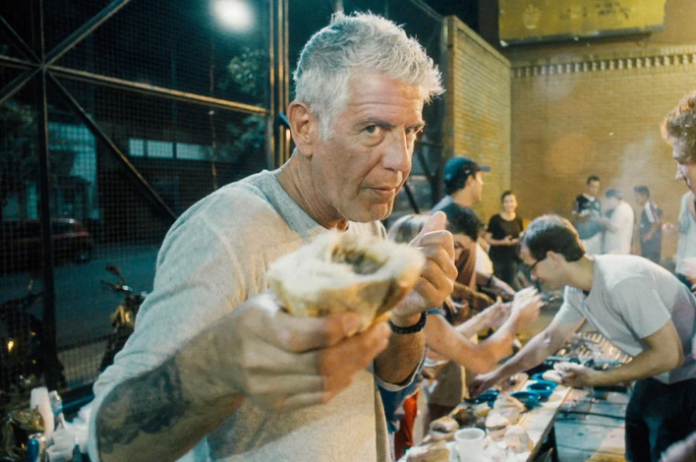 ROADRUNNER: A Film About Anthony Bourdain is directed by Academy Award®-winner, Morgan Neville (20 Feet From Stardom, Won’t You Be My Neighbor). He and co-producer Caitrin Rogers put together a fabulous documentary about the complex life of the late storyteller, explorer, chef, co-worker, friend, and father, Anthony Bourdain.  A best selling author who was given a platform and opportunity to taste, explore, and open his eyes to world. Bourdain shared his thoughts and experiences and gave humbly honest insight to millions of people all over the globe.

He’s an influential celebrity known and respected for his craft. Tony gets to indulge in food, culture, and have conversations with equally influential/notable people. No Reservations and Parts Unknown are beloved shows that embody for his gritty nature as we attentively listen to his next great adventure. He did not want to be considered nor compared to as a “TV travel guide” host. It was truly heartbreaking to learn of his death. The world lost a brilliant human being. After that, I can’t help but wonder (despite his fame), who Anthony Bourdain really was. How did his story come to such an unfortunately early and abrupt end?

I was grateful that Parts Unknown aired the final episodes after his passing. In a way, it was closure for the show. However, there was still this gaping hole of emptiness that lacked closure for the man himself. The only expectation I have for this documentary is that I hope it’s able to bring a deeper understanding intertwined with a proper send off that respectively recognizes, appreciates, and memorializes the life and work of Anthony Bourdain.

ROADRUNNER: A Film About Anthony Bourdain documents how he went from dishwasher to chef at the obscure Manhattan bistro, Les Halles to becoming one of the most notorious and beloved figures in the food world. Tony shot to fame in 2000 when his controversial book, Kitchen Confidential, became an overnight best seller. His book gives a crude look behind the scenes of working life in the restaurant business. Bourdain, going with the whole “fuck it” approach adds his opinions to the mix.

The successful combination has people kicking down the door to have him host a food and travel show. His tastes flavors in Rome, Melbourne and Tokyo and comes across danger in Port-au-Prince, Kinshasa and Beirut. Bourdain pushes himself and his crew past their limits while exploring culture and cuisine with his restless curiosity. Even going so far to accomplish a bucket list challenge of exploring the Congo. A journey declared the most difficult task ventured by him and his team. The upside is that this new job was more than he ever dreamed of. The downside, Bourdain noticeably spent the rest of his life contemplating if it was ever, the right choice made.

Before Bourdain launched to fame, the previous 43 years of his existence entailed his childhood in Leonia, New Jersey. He dropped out of Vassar College and got a degree at the Culinary Institute of America. Eager to step into a culinary career, Tony (as he likes to be called) spent his first years working as a dishwasher in Provincetown, Massachusetts. He’s young and looking for a means to cope while trying to keep afloat. It’s during this time that he battles with Heroin use and struggles with the “tug of war” challenge of maintaining sobriety.

Neville masterminds an unforgettable record of an extraordinary man’s unexpected rise to stardom. What makes this documentary incredibly outstanding is the amount of unseen footage shown. Dating as far back as 1999 and features all new interviews with a more intimate insight at who Bourdain was.  Memories are recounted from family, friends, and co-workers who’ve been impacted the most by Bourdain’s presence. The best supplier of these dark secrets and thoughts come from Bourdain himself. His own wry and instantly recognizable voice paints a nuanced portrait of the complexity, contradictory, and charismatic integrity of details surrounding his very own life. Immortalizing words are a fitting tribute to the man who reinvented cultural storytelling.

The romantic version of Tony’s nature is that he is talented, intelligent, charming, and burned with ambition. Qualities that are already well known and respected. Neville goes a step further in his documentary and portrays Bourdain with all his imperfections. Obsessiveness,  anger,  addictive personality, and occasional arrogance are uncomfortable staples included in Bourdain’s autobiographical memoir. By 2016, the frenetic pace of his publicly made life was mentally and emotionally wearing him down. A vulnerable man in a vulnerable world who admits his flaws and weaknesses is indeed, the stronger man. However, his demise was the final cry for help that is heard too late.

Suicide is a motherfucker and so largely problematic. He rose to the top, traveled all over the planet, had all his desires come true and still got lost. Although he’s not here today to continue the fight, this documentary enshrines his legacy and continues the fight for him. Producing a major stepping stone at recognizing warning signs and establishing a better support system to those (like Bourdain) who need it. It’s an honor to have such an inspirational figure of his magnitude who positively impacted the entire world. For the approach and artistry conveyed, even Anthony Bourdain would be proud!

Definitely worth a watch.

ROADRUNNER: A Film About Anthony Bourdain will release in theaters Friday, July 16.