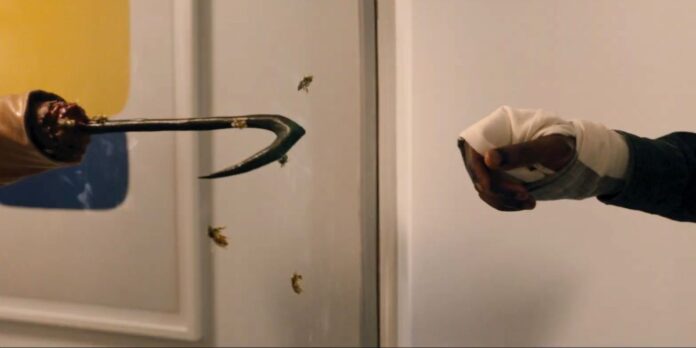 “What’s Candyman?” Yahya Abdul-Mateen II’s character asks Coleman Domingo in the new and creepy 30-second teaser for the upcoming Candyman remake/sequel. Over a harrowing operatic soundtrack, Domingo tells Abdul-Mateen, and in turn, us, how Candyman isn’t just an urban legend but a series of repeated tragedies. “Pain like that lasts forever,” he says. “Candyman is how we deal with the fact that these things happened. That they are still happening!”

Like all Jordan Peele’s horror projects (Us, Get Out), this version of the 1992’s horror classic will use the urban legend to illude to bigger issues around race in society. In the short trailer alone it references slavery, violence, and police brutality.

For as long as residents can remember, the housing projects of Chicago’s Cabrini Green neighborhood were terrorized by a word-of-mouth ghost story about a supernatural killer with a hook for a hand, easily summoned by those daring to repeat his name five times into a mirror. In present day, a decade after the last of the Cabrini towers were torn down, visual artist Anthony McCoy and his girlfriend, gallery director Brianna Cartwright, move into a luxury loft condo in Cabrini, now gentrified beyond recognition and inhabited by upwardly mobile millennials. With Anthony’s painting career on the brink of stalling, a chance encounter with a Cabrini Green old-timer exposes Anthony to the tragically horrific nature of the true story behind Candyman. Anxious to maintain his status in the Chicago art world, Anthony begins to explore these macabre details in his studio as fresh grist for paintings, unknowingly opening a door to a complex past that unravels his own sanity and unleashes a terrifyingly viral wave of violence that puts him on a collision course with destiny.

This new teaser combines scenes from the previous trailer with bits from the animated shadow puppet short released last week. It’s also the first time with this new movie that we’ve heard Candyman’s voice. “Tell everyone,” he commands at the trailer’s end.

Peele produced and wrote the film with Win Rosenfeld and Nia DaCosta, who also directed it. Along with Abdul Mateen II and Domingo, Teyonah Parris, Nathan Stewart-Jarret, and Tony Todd, who played the original Candyman, is set to star. As of now it’s supposed to be released in theater Sept. 25th, but we will see if that gets pushed back due to Covid-19.

Watch the Candyman trailer below.