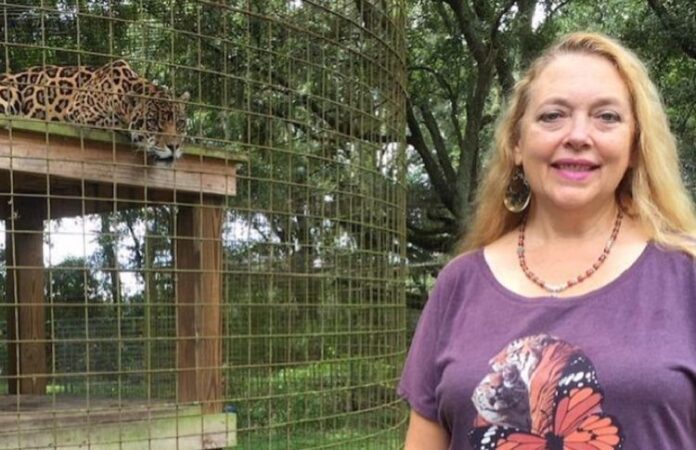 I, like everybody else, have been obsessed with Netflix’s Tiger King docuseries. It’s a little disturbing how much we are all into these insane big cat-obsessed people, especially since they’re all pretty awful, but what’s not surprising is to see others try to get in on the action. We already know about a series adaptation featuring Kristen Wiig as Carole Baskin, and rumors (from a VERY unreliable source, mind you) of a new episode this week, but now Investigatigation Discovery is putting their own spin on the Tiger King story.

Investigation Discovery is launching a Tiger King sequel docuseries, but rather than focus on the bizarre criminal exploits of Joe Exotic, it will turn to one of his frequent targets: Carole Baskin. That’s right, the mystery surrounding the Big Cat Rescue founder’s missing husband Don Lewis is being put in the spotlight. In Tiger King, we saw Joe Exotic go nutso terrorizing Baskin about Lewis’ disappearance, outright accusing her of murdering him and feeding his body to her tigers. But is there any weight to those accusations? That’s where ID comes in.

Titled Investigating the Strange World of Joe Exotic, the series promises “the investigation you didn’t get to see, revealing the secrets only Joe knows and the exclusive footage that has never been shown.”

“Love her or hate her, Carole is now in the center ring of the big cat circus,” ID said in a statement. “Is she a selfless crusader and protector of animals, who found unimaginable strength despite the mysterious disappearance of her husband? Or are we witnessing Carole Baskin’s master plan finally take effect? Despite her claims of innocence, did she orchestrate the disappearance of Don Lewis to seize control of his fortune, consolidate power and lay waste to her foes? No one seems to be talking – except for one man – and that man is the center of ID’s upcoming investigative series.”

So basically, this seems to be giving a platform to Joe Exotic to spout whatever conspiratorial nonsense wants, without Baskin getting much of a say. She has repeatedly denied any involvement in her former husband’s 1987 disappearance, but the way Tiger King frames her…well, she looks pretty guilty. She’ll probably look worse after this.

I’ve been leery of anybody who thinks Joe Exotic a victim in any way. This is the same guy who sold tiger cubs out the back of a truck, is credibly accused of burning down his own facility to hide crucial evidence against him, and oh yeah, tried to hire a hitman to have Baskin assassinated. He’s not worthy of our sympathy, nor is anybody else on that show regardless of the sob stories they spun.

It’ll be interesting to see what Investigation Discovery does with Baskin’s story, and what the fallout will be. Suffice it to say, Hollywood is not done with Tiger King and may not be for a long time. A movie is inevitable.