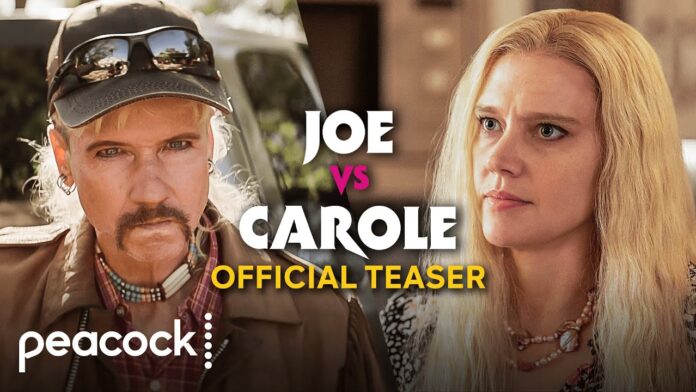 In terms of perfect timing, it doesn’t get much better than this. Just days following “Tiger King” Joe Exotic being resentenced to 21 years in prison for attempting to murder rival Carole Baskin, the trailer for Peacock’s Joe vs. Carole has arrived.

We all know the story by now, don’t we? The Tiger King doc on Netflix was arguably the thing that got a lot of us through the early stages of the pandemic. We fell in love with its larger-than-life big cat obsessed characters, and the blood feud that erupted between zoo owner Joe Exotic and animal rights activist Carole Baskin. The hook of this new Peacock limited series is the casting of John Cameron Mitchell and Kate McKinnon in the lead roles.

Joe vs. Carole will hit Peacock on March 3rd.

Based on the Wondery podcast “Joe Exotic: Tiger King,” hosted and reported by Robert Moor, the limited series will center on Carole Baskin, a big cat enthusiast, who learns that fellow exotic animal lover Joe “Exotic” Schreibvogel is breeding and using his big cats for profit. She sets out to shut down his venture, inciting a quickly escalating rivalry. But Carole has a checkered past of her own, and when the claws come out, Joe will stop at nothing to expose what he sees as her hypocrisy. The results prove dangerous.