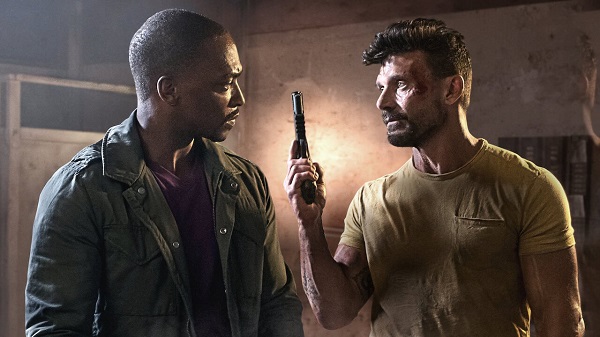 Before we begin, yes we know Falcon Captain America and Crossbones are once again fighting each other, but Netflix’s newest Original Movie Point Blank, gives each of our Marvel favorites a little bit more to do with each other in this rather quick and action-packed thriller.  Paul (Anthony Mackie), who’s just working the late shift while waiting for his wife (Teyonah Parris) to give birth to their child when his world gets turned upside down and he answers the age-old question of how far will you go to protect the one you love. 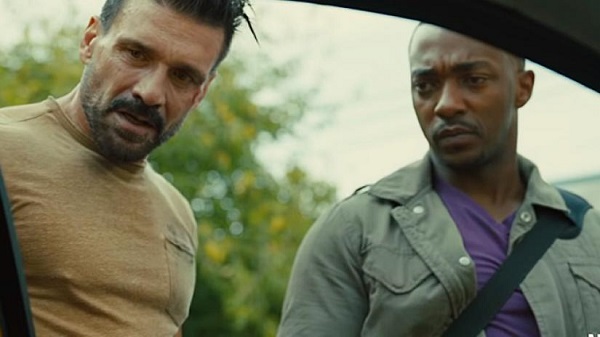 We are first introduced to Abe (Frank Grillo), a professional criminal, who after a series of unfortunate events has him assumed as the killer of the city’s District Attorney and after trying to escape the scene of the crime, and after ending up shot and hit by a car, ends up at the hospital where Paul works.  Abe’s brother Mateo (Christian Cooke) knows his brother’s in the hospital and under police guard, so in an act of desperation takes Paul’s wife hostage and demands Paul releases Abe.

Rather than play it like a defenseless person against the wall, Mackie’s Paul springs into action immediately.  In a pretty decent action spectacle, Paul finds a way to get Abe out where we learn the meat of the story.  Abe is in debt to gangsters, but also has some inside baseball on corrupt cops throughout the city, and now the two are on the run from both sides of the law.  In Gabe’s possession is proof against the cops, and he hopes to bargain his debt away from the gangsters.  Marcia Gay Harden and Boris McGiver play the cops on their trail and you never know what cops are on the take or not as the chase continues.

Mackie and Grillo are great as they riff off each other throughout the film and the car chases work rather well thanks to director Joe Lynch.  However, the movie falls flat as many things feel rushed. Teyonah Parris at first seems like there’s more for her to do, but instead just plays the hostage throughout the film with little else.  Towards the third act, we meet the gangsters Abe owes a debt to led by Markice Moore, and they are cringe-worthy stereotypes of every 90’s hood movie.  In addition to running a criminal empire, Moore styles himself an amateur filmmaker played for laughs, that fall really flat.  That said, the film has a hell of a soundtrack with songs from Black Flag, Grandmaster Flash, James Brown, Kid ‘N Play, Eazy E, and Whitesnake to name a few as all the action is going on, that’s where all that Netflix money for this movie went.  In all, Point Blank is a fun guilty pleasure to soak up your weekend sitting on the couch.  Both Mackie and Grillo continue to bounce off each other very well, whether they are in the MCU, or in any other universe.