“Your radiator is D flat”, says Peter Lucian (Peter Sarsgaard), a self-professed “house tuner” to one of his loyal customers.

It’s an odd thing to say. Do radiators project sounds in accordance with musical notes? According to Peter, everything does. The noises in a person’s world create sounds that harmonize or throw discord into one’s life. So if your radiator is clashing with your toaster, well, it might explain anxieties or your lack of sleep.  The idea seems preposterous, but given the wild New Age philosophies going around is it really so far-fetched? It’s no weirder than the cult of SpinCycle, if you ask me. A wonderful idea is presented in the most dull fashion in Michael Tyburski’s The Sound of Silence, which is based on his short film and probably should’ve stayed that way. I mean that in the best possible sense, too, because The Sound of Silence has compelling human moments, just not enough to sustain an 85-minute feature. Sarsgaard, playing another uninteresting man who does interesting things just as he did in Experimenter, perfectly embodies Peter’s measured and analytical nature. His demeanor fits the mood of the movie as a whole. Peter works primarily in New York, gaining a devoted following largely through word-of-mouth. He hopes to one day get his theories published, but the scientific community as a whole see him as a joke. There’s a little bit of desperation in Peter, and he’s warned by a mentor not to drift into obsession. But Peter believes in his theories, even going so far as to scoff at an offer by a company hoping to make a profit on them.

Bad timing then that Peter takes on one of his most challenging cases, that of Ohio transplant Ellen Chasen (Rashida Jones), whose home is completely out of sync.  She’s beautiful but lonely, that much is clear to us, not really to Peter who is too busy with his tuning forks and gauges to understand human interaction. When he asks to lay on her bed, in order to better recreate her daily routine, she’s mortified. Not because it’s embarrassing, but because it paints a picture of how isolated her life actually is. But his theory? She needs a new toaster. 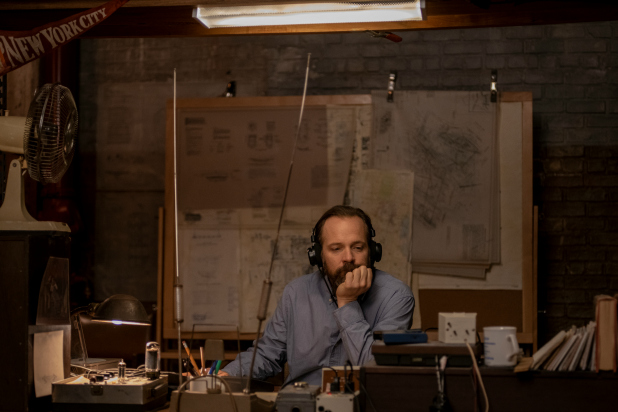 Ellen’s need for human connection and Peter’s total ignorance of it make for compelling interactions, drowned out by flat, unappealing cinematography and a sea of white noise. It’s clear Tyburski is influenced by avant-garde filmmakers and composers, which is fine if you’re making a deliberately experimental movie. As Peter and Ellen’s working relationship evolves into something possibly romantic, Tyburski drifts into formula that betrays any notion of grander pursuits. But most importantly, the movie is just extremely slow and not at all enjoyable to look at for anything more than a few minutes. A little bit of comedy might’ve helped, this wonky premise demands it.

Despite a pair of strong performance and one of the year’s most unique high-concept ideas, The Sound of Silence fails to resonate.