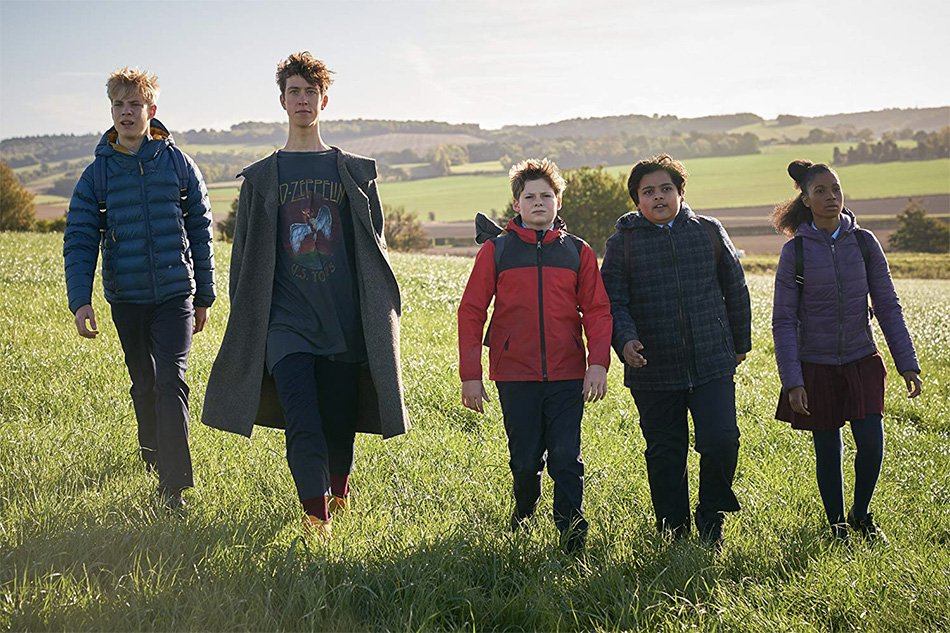 Welcome back, Joe Cornish. Don’t make us wait this long again. The director of 2011’s awesome alien invasion flick Attack the Block has hardly been heard from since, and he has been missed. The streak of optimism that coursed through Cornish’s previous film, that the kids of today are strong and capable enough to literally save the world, is found once again in his Arthurian adventure, The Kid Who Would Be King. An old-fashioned and enjoyable movie made for kids, it relies heavily on Cornish’s clear enthusiasm for the material and the charm of his young cast.

Set in the present day, The Kid Who Would Be King makes no bones about where it’s coming from, as news reports preach the hate and division that have torn the world apart. What those greedy, warmongering adults have sewn has bled down to the children of London, as well, and quite literally into the bowls of the Earth. Andy Serkis’ son Louis Ashbourne Serkis plays 12-year-old Alex, a regular kid, probably braver than most, who miraculously pulls the legendary sword Excalibur out of a construction site. Deep underground, the evil sorceress Morgana (Rebecca Ferguson) has seized upon the world’s despair to loosen her mystical bondage, so that she can return to enslave the world.

The only ones who can stop her are Alex, naturally, and his unlikely comrades. Dean Chaumoo is Bedders, Alex’s loyal best friend and one always in need of his pal’s protection from school bullies Lance and Kaye, played by Tom Taylor and Rhianna Doris. Just as in the legend of old, which Alex learns from an illustrated book given to him by his missing father, he must make friends of his enemies and unite to defeat Morgana’s evil before it’s too late. Joining them is scene-stealer Angus Imrie as a young wizard Merlin. His downright bonkers performance as the awkward time-displaced mage is the movie’s highlight, as he claps, snaps, and makes other weird motions for each and every spell he casts. Imrie is so good that he overshadows the great Patrick Stewart, who has a couple of brief appearances as the older version of Merlin.

Updating the Arthurian legend for a new audience has been done, and quite recently with cataclysmic failure. Just ask Guy Ritchie how King Arthur: Legend of the Sword panned out. Cornish is smart about it; he doesn’t try to make everything about the medieval tale “hip” and “cool”, he simply ties some of its many themes of chivalry, bravery, and honesty into lessons that his characters can use. Not only are these ideals crucial to their quest, but they stand as life lessons they will need to win future battles against decidedly less-magical foes. To that end, Alex must also cope with having a father he knows nothing about, and that particular subplot is given so much room to breathe that it’s surprisingly effective emotionally.

As for the quest itself, it follows a simple point A to point B structure, and while the fiery demons on the kids’ trail look impressive, they become a bit derivative after a while. Cornish does add a clever wrinkle, in that everyone who isn’t knighted vanishes upon the arrival of Morgana’s minions, meaning the kids are literally forced to survive on their own. The biggest and best conflict comes from within the quartet itself. These are still kids, a couple of them aren’t particularly reliable, and they are all hyper-emotional. The actors portraying them aren’t especially charismatic individually, but together they amount to more than the sum of their parts, and having Imrie’s daffy antics around definitely doesn’t hurt. Together they make a formidable group during the film’s gigantic finale, in which the fate of the world is battled out, where else, but on school grounds.

The Kid Who Would Be King is the sort of kids’ movie that we don’t see from Hollywood very often, as the need to appeal to all-ages takes paramount. Cornish is at least trying to bring that youthful sense of adventure and hopefulness back, and proving that it shouldn’t be as difficult as pulling a sword from a stone.