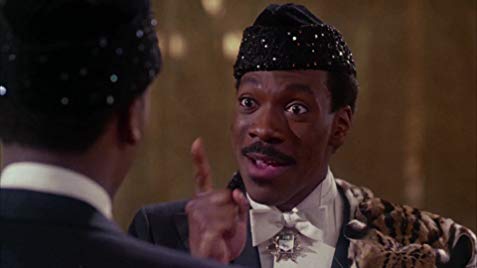 Men in Black 4, Bad Boys 3, and now Coming to America 2. All of the phony movie posters that your friend swears aren’t just Facebook spam are actually happening. Now all that remains is Friday 4 with Ice Cube and Chris Tucker.

That’s right. We’ll be heading back to Zumunda for Coming to America 2, and Eddie Murphy will return as fictional African prince Akeem so he can have his royal penis cleaned once more.  The sequel to the classic 1988 comedy is a real thing, with Hustle and Flow‘s Craig Brewer directing.   Arsenio Hall, Shari Headley, John Amos, and James Earl Jones are being sought to reprise their roles, as well.
Black-ish creator Kenya Barris was hired last year to rewrite the original duo’s script, which will find Akeem heading back to America to find his long-lost son and future heir of Zumunda. Coming to America introduced the world to a load of colorful characters, mostly played by Murphy and Hall who were at their creative peek back then. Who can forget Randy “Sexual Chocolate” Watson? Or Eriq La Salle as Darryl with his juicy Jeri Curl? Or the entire barbershop full of chatty geriatrics?  And that’s really just the start. If you were a kid at the time you probably wondered, as I did, whether McDowell’s was really better than McDonald’s.
The point is, Coming to America is a beloved favorite for a reason and this is a pretty big deal. Murphy, who just worked with Brewer on Netflix’s upcoming film Dolemite is My Name, recognizes what a moment this will be for a lot of people…
“After many years of anticipation, I’m thrilled that ‘Coming to America 2’ is officially moving forward,” Murphy said. “We’ve assembled a great team that will be led by Craig Brewer, who just did an amazing job on ‘Dolemite,’ and I’m looking forward to bringing all these classic and beloved characters back to the big screen.”