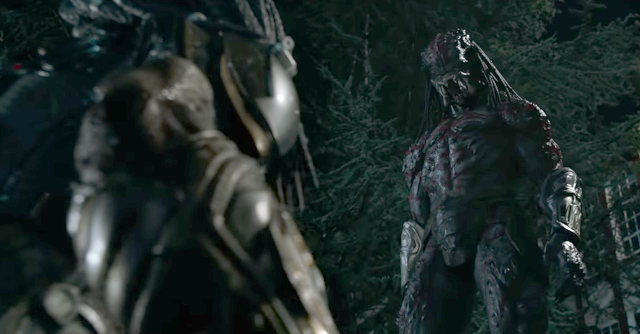 The baddest hunter in the galaxy returns to theaters today with The Predator, the long-awaited sequel from Shane Black! The film introduces more than just your garden variety predator, but a super predator, fugitive, and even a predator hound.  Funko’s line of Predator action figures has all of these and more, available right now from our friends at Entertainment Earth!

Do some hunting of your own to collect these killer figures: the fugitive Predator which includes a masked Chase variant. There’s also the hybrid Assassin Predator, and his loyal Predator Hound which comes in a alternate Chase variant, as well.  Hit up Amazon for a heat vision version of the Predator Hound (I’m guessing Fox thinks the Hound will be a breakout character?), while FYE has a gun metal take on the Fugitive Predator which is super cool.  The Funko Shop also has Jacob Tremblay’s character, Rory, decked out in the Predator mask that launches the film’s central plot.

If you’re as Pop! Vinyl obsessed as me, the best places to go are our friends at Entertainment Earth. Our friends have the deepest inventory of Pops, including exclusives, at the best prices anywhere on the Internet. When you click on any of our below links and make a purchase we get a small commission that helps us keep the lights on, at no cost to you at all. Every little bit helps, and we thank all of you continue to support us and our sponsors. Thanks!