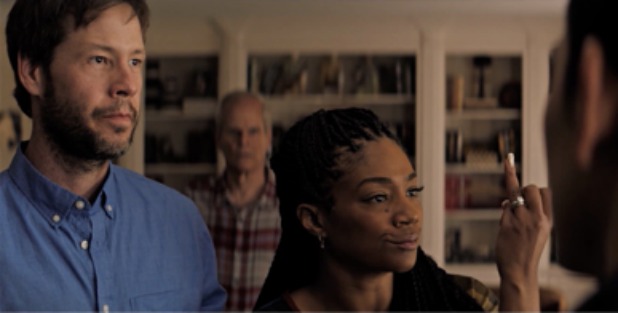 It’s safe to say that politics has divided this country in ways we’ve never seen before, causing friends to unfriend one another at a rapid rate, and making already-tense family dinners unbearable. If I get another email from Uncle Joe spouting some QAnon bullshit I’m going to refuse to accept that he’s one of ours. While this is definitely a problem with no easy solution, it’s also a great opportunity for some laughs, and that’s what Ike Barinholtz’s new comedy, The Oath, is all about.

Barinholtz, who you probably recognize from Neighbors, Suicide Squad, and more, takes triple duty as writer, director, and star of a ridiculous story that sounds eerily possible in today’s age. When the President of the United States demands all citizens sign a “Patriot’s Oath” of loyalty to him, it causes a split down tribal lines. With the post-Thanksgiving deadline to sign approaching, it turns one ideologically-diverse family’s dinner into a war of words.  Barinholtz has assembled a great cast for this one with Tiffany Haddish, Nora Dunn,  John Cho, Carrie Brownstein, Billy Magnussen, Meredith Hagner, Jon Barinholtz, and Chris Ellis.

The Oath hits theaters on October 12th. Watch it with your ideological opposite and discuss it after.