When it first premiered earlier this year at Sundance, it had critics’ hearts, describing it as one of the best films of the year and a Puerto Rican version of Moonlight, as it was showing you the ideas of family, suffering, and sexuality through the eyes of a trio of brothers in rural upstate New York during the 80s.  We The Animals is a very intriguing one.

Based on author Justin Torres’ semi-autobiographical novel, the film focuses on a trio of brothers who’s life, to say the least, is quite hectic.  Their parents aren’t going to win any awards for their parenting style.  The father, Paps (Raul Castillo), and mother Ma (Sheila Vand) have a volatile relationship.  They are loving and try to work it out, when Paps isn’t blackening her eyes and leaving her with the kids for an extended period of time.  When Paps isn’t there, Ma doesn’t know what to do.  She doesn’t work, she doesn’t shop for food.  This forces Joel (Josiah Gabriel), Manny (Isaiah Kristian), and youngest brother Jonah (Evan Rosado) to fend for themselves.  As a result, the brothers form a tight-knit bond with each other. 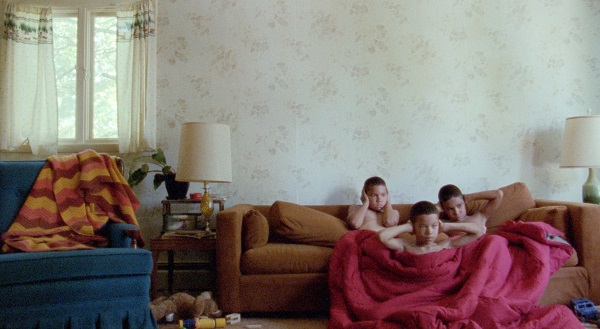 While we get to know Joel and Manny, most of our time is spent with Jonah as he’s not only the youngest, but he also goes into his own isolation away from the family to deal with the trauma their parents are inflicting on them.  Joel and Manny seem to have the same hard edge their father has, but Joel has a more sensitive side.  There’s a moment where he talks with Ma and she tells him she doesn’t want him to grow up to be ten years old, instead just be “nine plus” years old, remaining her baby boy, so that he doesn’t turn out like his angry father.

We The Animals doesn’t operate in a linear fashion, instead moves from moment to moment, more like a dream, showing images while Jonah narrates key moments of his life.  Visually, the film is amazing, which one could expect from director Jeremiah Zagar, who is known more for documentaries rather than feature films.  The film showcases breathtaking Upstate New York scenery, and beautiful cinematography.  The animation from Jonah writing drawing in his personal journal is very unique and gives us a surreal viewpoint to the mind of the young ten-year-old.  At the same time, the film doesn’t really get to the meat of the subject until the third act of the film.  More attention is given to the dysfunctional family drama, rather than Jonah learning and wanting to explore his sexuality, which dominates the story once comes to fruition.  The family drama seems to disappear to focus on Jonah after a while.

Even still, the film is a dynamic, visually impressive coming of age film.  Having is focus almost exclusively on the young trio of brothers is a big gamble.  The casting of Josiah Gabriel, Isaiah Kristian, and especially Evan Rosado was great as they acted flawlessly, carrying the whole movie.  The three child actors give authentic performances (and we all know when bad kids act, it can distract a movie to death) that elevate the film.