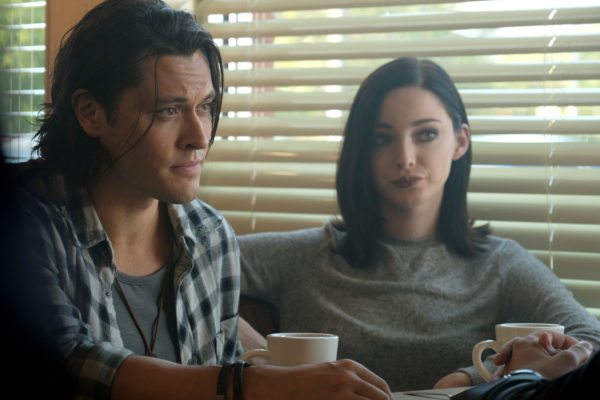 Last week on The Gifted, Director Turner turned up the heat on the Mutant Underground.  Nothing like knowing the mutants messed with your mind and erased the memory of your dying daughter to into you into Captain Ahab.  After striking a deal with independent contractor Campbell, he was back in play at Sentinel Services and laws be damned.  Because Sentinel Services was cracking down on everyone who was even remotely possible of being a mutant, many people who thought they were safe were shacking up at Mutant Underground headquarters.  While Caitlin was striving for some normalcy for the young mutants by teaching them studies, Polaris was training them to be the next generation of X-Men.  Lauren befriended one of her fellow trainees while her brother Andy went with their father Reed and Marcos on a mission to Baton Rouge to find out what was going on with the government using mutants to fight against other mutants.  After the successful caper, Marcos received a call from former girlfriend-now-Cartel-boss Carmen that he had to pay her what is due, meaning he has to use his mutant powers for her illegal activities.

This week was an interesting episode.  We got to see a darker side of Marcos as he’s forced to revisit his past life for the sake of Polaris and keeping his promise to his ex.  However, given how normal it was for him to go back to death and destruction, him doing this on a consistent basis will probably force him back to the dark side.  Blink and John went on their own adventure as well.  While this was good as she finally is back with the Mutant Underground, it seems that it’s John who now is starting to develop feelings for her, complicating things with him and Dreamer.  We got to see a little bit of what Campbell is doing and how he is using mutants for his own nefarious means, to the point where it even disturbs Turner.  Reed gets the chance to play controlling father as he comes in between Laura and her new crush as well.

Let’s take a look at a few highlights from this week’s episode “eXtreme Measures:” 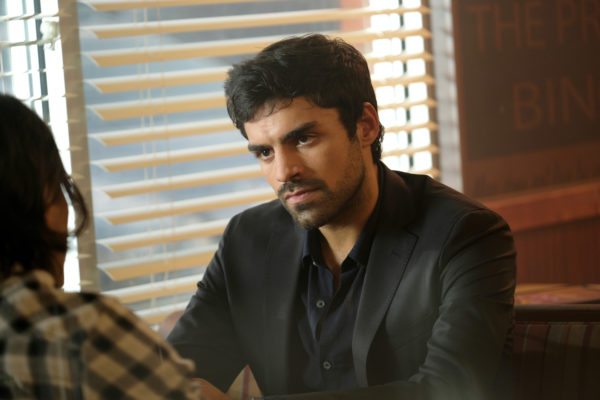 As usual, the episode opens up with a flashback.  This time we focus on Marcos before he joined the Mutant Underground.  This was before Polaris was rocking her green ‘do as she and John Proudstar try to recruit him to join the Mutant Underground.  The comment that even though he was in the employ of the Cartel at the time, he helped coyote mutants across the border.  Why not do that full time and not work for a murderous drug dealing organization and give your life some meaning?  In the past, it seemed as though he and Polaris were polar opposites, but given current events, we know that this was the beginning of a strong relationship as the two of them
Blink and John Go On A Road Trip: 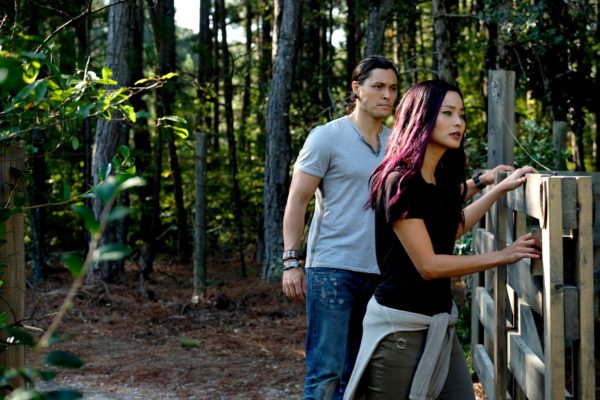 Last week Blink left the Mutant Underground thanks to Dreamer messing with her memories and John keeping it a secret.  And who can blame her?  Not only does she feel violated for Dreamer implanting a memory in her head for the sole purpose of making her focus and control her teleportation powers, but John opts not to tell her.  From her perspective, she’s just a tool for them and not a group that actually cares about her and her well-being.  However, she hasn’t gotten really far.  Thanks to his tracking abilities, John is able to find her quickly and despite her pushing him away, he feels he owes her.  When she was going through her kamikaze teleportations a few weeks back, she kept trying to teleport to a random country road.  John decides that he will help her find that place.  Good thing he’s a tracker.
The place is a former safe space for mutants who could not fit in and appear “normal” and a place that she had been at in her younger years.  When they finally find the place, someone else has been there before they have.  Turns out that the Sentinel Services already got there.  It looks like they did not take any prisoners as inside it was properly sprayed with bullets and there’s blood everywhere.  This causes Blink to break down as her family that she depended on have been killed.  The Mutant Underground’s battle with the Sentinel Services might not have been hers before, but now it is.  She opts to go back with John and they give each other a warm hug.  Later on, when John runs back into Dreamer and kisses her, he has some concern on his face.  Looks like a new love triangle is brewing.
Reed Gets Involved In Laura’s Relationship: 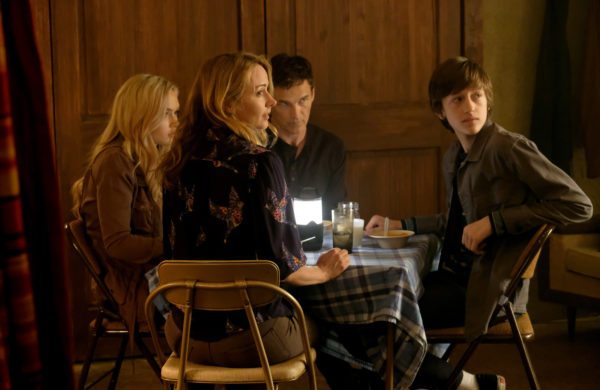 As Reed and Sage are going through the hard drives taken from the Baton Rouge location, he sees files on mutants that Sentinel Services have been tracking.  One face/power set catches his eyes: Wes, the young mutant that is wooing Laura.  Turns out, Wes has a criminal file.  Who would want their daughter dating a criminal?  Reed steps in and tells his daughter about Wes’ background.  Still, head over heels for Wes, Laura rejects her father saying that he is just being his usual prosecutor, prosecuting mutants for being mutants.
It’s only until she confronts him out of curiosity.  Wes tells her that he did commit crimes when he was revealed to be a mutant, he had to fend for himself.  Having the ability to create illusions is a great gift for anyone wanting to pull off a con, so he did what he had to do to in order to survive.  This makes Laura mad with her.  Seeing the consequences of his actions, Reed talks with Wes and they come to an understanding.   Wes fesses up to the rest of the Mutant Underground about his past and they forgive him.  By the end of the episode he leaves to go to another Mutant Underground location, but not before he and Laura finally get the chance for a passionate kiss.
Campbell Employs Mutants In A Dangerous Way: 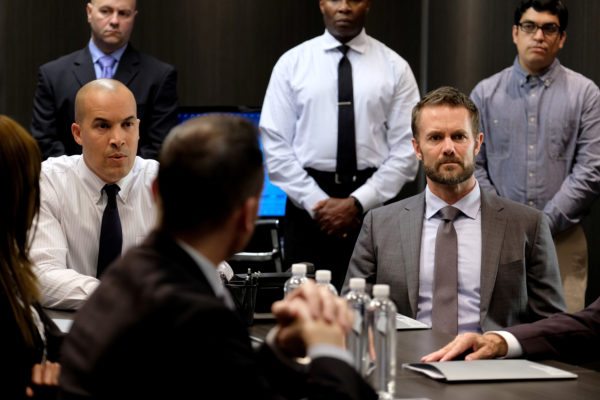 Now that Turner is back in the fold at Sentinel Services and trying to track the Mutant Underground, he has a new enemy: legal rights and government bureaucracy.  Since Turner is going after the Mutant Underground without warrants, this attracts the attention of the Department of Justice.  When he is confronted by one of the lawyers, she warns him that he will have a fight on his hands.
During a meeting discussing options, the lawyer steps up to confront him.  It is then that she starts feeling pain in her head.  One of Campbell’s associates was concentrating hard during the meeting, meaning that he was a mutant Campbell is controlling and using his powers to telepathically attack her.  Turner is the only one who notices this and in a later phone conversation confronts Campbell about this, but Campbell assures him that nothing bad will come out of it.  Even if a new Justice Department official comes forward, it’ll be a few weeks, so they have breathing space to do whatever they want.  Campbell, later on, shows Turner a secret room where brainwashed mutants are being held, meaning they have their own army to take on the Mutant Underground.
Marcos “Breaks Bad:” 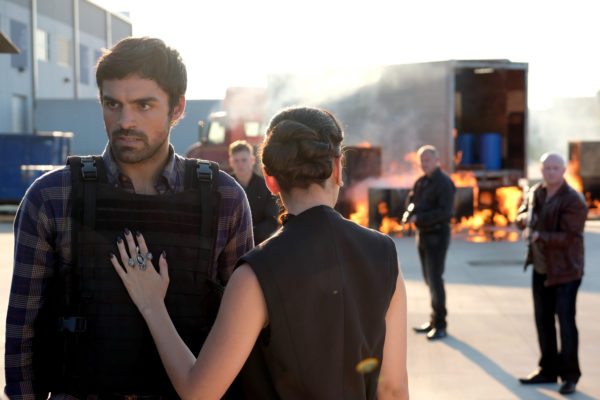 Much of the episode focused on Marcos as he had to pay his due to Carmen, his former Cartel Girlfriend.  Since Carmen helped him find out where Sentinel Services was holding Polaris, he now has to do what she wants, and what she wants his him to be her muscle.
Marcos lies to Polaris and says he is going on a run to help another Mutant Underground location (are we going to see these other places?).  Before he leaves, he puts on his Cartel signature necklace “Santa Muerte” (Holy Death).  When he meets up with Carmen, she’s goading him to embrace his dark side, recalling their “good old times” together.  He tells her that he’s not going to kill anyone in her name.  She doesn’t need him for that.  She wants him to use his “Eclipse” powers to destroy a rival’s drug supply.  She tells him that others will do the killing as she has another mutant in her employ.
When Marcos goes into the action, he lights up all the drugs and when he attacks the Russians, there’s a certain glee in his face.  He may not want to go to that lifestyle, but he seemingly enjoys it.  Polaris arrives just when she sees him in action, and seen Carmen give him a kiss on the cheek, further angering her.  When she asks him how everything went at the other Mutant Underground place, he continues the lie until she catches him forcing him to fess up.  He tells her he did it for her, but she’s not too happy about it.
Next week, Reed confronts his father, who it turns out is responsible for some of Sentinel Services’ activities.