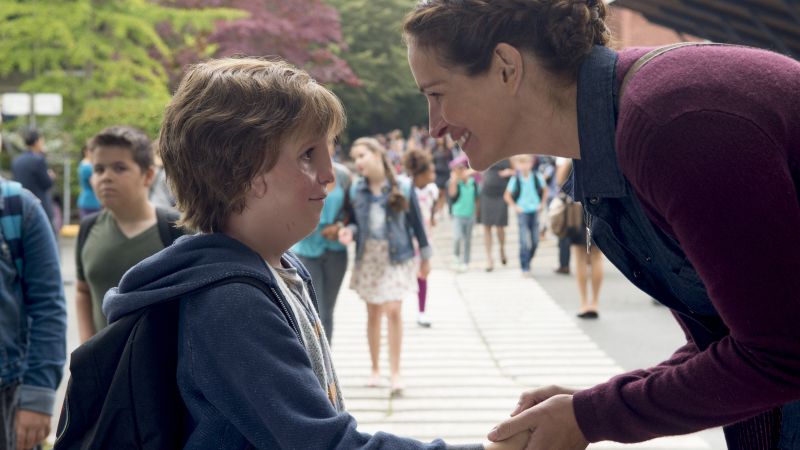 There’s nothing wrong with a movie that is unabashedly meant to make you feel good. There’s nothing wrong with a movie whose sole mandate is to encourage everyone to just be kind to one another. Of course, how said movie goes about it is where the wheels so often come off. If you’ve seen the trailers for Wonder then you already know it’s a movie that demands you bring a box of Kleenex; in fact I think they were giving them away at the screening I attended. It’s going to make you cry, that much is a given. And while there are moments of sadness and perhaps a little bit of regret at our own treatment of those who are different, it will be tears of joy rolling down your cheeks.

Based on the bestselling novel by R.J. Palacio, Wonder boasts direction from The Perks of Being a Wallflower‘s Stephen Chbosky. I don’t know if there’s another filmmaker out there who so fluently speaks the language of school-aged kids, whether they be teens or slightly younger. The film centers on Auggie Pullman, played by adorable Room breakout Jacob Tremblay. Auggie is just your average 10-year-old kid; he likes video games, science, playing with his dog. Oh yeah, but he was also born with a congenital disorder that caused severe facial disfigurement, so bad that he’s endured 27 surgeries just to be able to breathe. As a result, Auggie likes to keep his face hidden under an oversized astronaut helmet, and he’s been homeschooled by his mother Isabel (Julia Roberts) since he was old enough. Now it’s time for that to change and for Auggie to get out there into the big bad world, and the even more terrifying world of public school.

Auggie may be the centerpiece of this story, or as his older sister Via (Izabela Vidovic) puts it, “Auggie is the sun”, but it isn’t just about him. What’s beautiful about Wonder is how deeply it fleshes out the important people in Auggie’s life. We get to not only see him through their eyes, but them through his. One of the most vital is Jack (Suburbicon‘s Noah Jupe), a scholarship kid who may be made of better stuff than most of the other students, in particular Julian, a bully who makes Auggie’s life miserable. We also see what it’s like living in Auggie’s shadow, as Via has been forced to do her entire life. While most of the kids in school stop, stare, or avoid Auggie outright, it’s important to consider that they too have problems to contend with.

Compassion and empathy are Wonder‘s heart and soul, and it’s a message that isn’t forced upon us in a heavy-handed manner, but with subtlety and grace. For the most part, anyway. While these lessons reverberate throughout, the schmaltzy score and a couple of manipulative storylines threaten to be a wet blanket on the whole thing. Let’s just say this is a movie that has enough tear-jerking moments that it doesn’t need to include the family pet in any of it. And one story, which involves Via’s best friend pretending to have her life, is undercooked and unnecessary to say the least. There also could have been more time spent with Owen Wilson as Auggie’s “cool Dad” Nate. He pops in and out, acts relatively immature in the way we expect from Wilson, but we learn precious little about him compared to Isabel, who gave up her career to take care of Auggie. What has been Nate’s sacrifice? It’s not to say Wilson isn’t good in the role, heck, he and Roberts are basically the parents any kid could ever want, but his connection to Auggie doesn’t seem as tight as the other characters.

Wonder is one of the best family films of the year, and as we enter the season of charity and giving it’s arriving at just the right time.