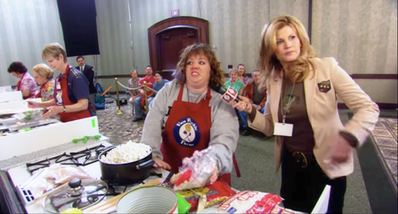 Cook Off! the mockumentary styled, parody of the world of cooking competitions was a let down to say the least, but that was honestly pretty much expected. The movie stars Gary Anthony Williams, Niecy Nash, Wendi McLendon-Covey, Stephen Root, Diedrich Bader, Sam Pancake, Jennifer Cox, and Melissa McCarthy. If you’re not in the know on the troubled history for this movie, it was apparently made 10 years ago, back in 2007. It premiered at the US Comedy Arts Festival and has not been viewed by the wider public (for obvious reasons) since… until now.

I posted a news article on here a while back when the trailer for this movie initially dropped. Going back and looking at my reaction to the trailer, I wasn’t completely off in my pre-assessment of this movie. To summarize, I noted that:

Yet, I still held out hope. Unfortunately, my predictions turned out to be pretty on the nose. It wasn’t funny. Much of the humor relied on over-used stereotypes that may have seemed fresh and funny back then, but as of now feel a bit old; like we’ve moved on and progressed past that kind of fashion. Seeing as though this was the basis for the humor the movie didn’t get more than a chuckle out of me here and there.
This isn’t to say that all of the comedians did horrible with their characters, it’s actually quite the opposite. This movie was built around a premise that revolved around outrageous and cartoony characters and I think they all did well in doing that. With that being said, I also realize that that’s not much of a reward when the fact that they’re comedians that are known for this kind of stuff is brought into the equation. If I had any hope or positive expectation for this movie it would’ve been that that would have been the case.
In terms of Melissa, her character, Amber, did in fact come across as a lot more endearing as compared to her other characters from previous movies like I thought she would. This is so much so, to the point where I concluded that I enjoyed watching her character more than anyone else’s. Even though her character’s whiney voice does become a bit annoying at times, she was fun to watch
and you could empathize with her, instead of being purposely turned off or disgusted. I wouldn’t have been upset and I probably would’ve tuned into a movie, had it existed, that literally and only revolved her character showing the journey that she went through to get to the competition and no one else’s.
(Side note: if any interest that you have in this movie is tied up in the excitement and/or expectation that you’re watching another Melissa McCarthy movie, just know that this was before the “Bridemasids,” “Ghostbusters,” “Mike and Molly” Melissa McCarthy, therefore she is not the focus in this movie by any means. She’s relegated more so to the position of “side side character,” gracing the screen for a total of about 20 mins (?))
One thing that I never really took into account was what Lionsgate’s process of re-editing entailed. Not to say that I may have picked up on everything, but there were two things that I picked up on that seemed incredibly obvious to me – if I turn out to be wrong then I would be shocked; it’s apparentness was just too much for my liking. The edits in the beginning and through the movie that were filled with various plates full of a plethora of food concoctions and combinations just screamed “this wasn’t in the initial end-product” to me. Between that and the almost cartoony background sounds it all came off as being a farce and like this was Lionsgate’s attempt at trying to cash out on Melissa’ s cash cow as justification to get this movie out to the public.
Why someone pushed for this movie to actually see the light of day and why someone ok’d it is beyond me. It was obvious from the beginning that there were reasons why the movie was shelved for so long and I now unfortunately know why. Lionsgate, honestly could have and should have saved whatever money that they shelled into this project and used it for something that made a bit more sense; they should’ve just let it be. If Lionsgate, however, really did want for this story to be viewed by the masses, then they should have taken a bit more time and put a little more care into the final product.
Cook Off! releases in theaters November 17, 2017
Rating 1.5 out 5