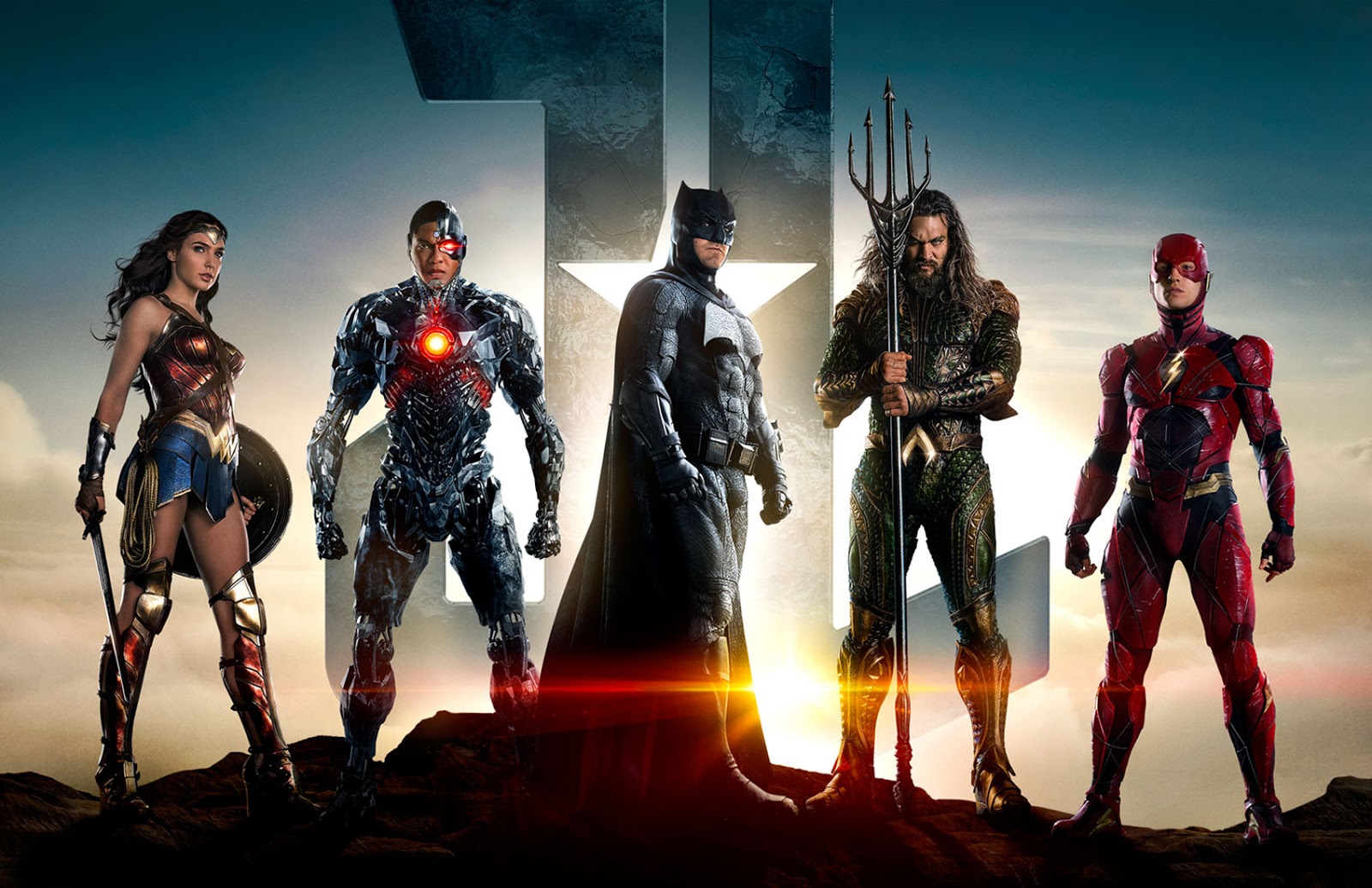 “I need a hero, I’m holding out for a hero ’til the end of the night”
-Bonnie Tyler

Full disclosure, I just always wanted to write something that started with a song lyric in quotes…it just seems so classy. The DCEU has been a roller-coaster of expectation and delivery. I should be up front and say I loved Man of Steel, thought Batman V Superman: Dawn of Justice was far better then people give it credit for and, obviously adored Wonder Woman. My feelings toward the universe are not, well, universal and most people thus far have really only expressed a lasting like for the Amazonian. Yet, every time the world at large gets super excited when the trailer drops and eventually let down when the movie premiers. Needless to say, no matter how amazing the pre-release stuff looked, a lot of people questioned whether the end result would be what was promised. Well, the league has been united and we have a firm answer of whether it lives up to the hype, and that answer is “..uhhhh, kinda?” We arrive back in the DC Universe shortly after the events of Batman V Superman: Dawn of Justice. Superman is gone, and the world is in mourning. Batman (Ben Affleck), while patrolling Gotham, has found winged creatures who leave a distinctive “three box” symbol when they are destroyed…a symbol that was found replicated across documentation recovered from Lex Luthor and revealed to be “mother boxes”, cosmic power that gives the possessor ultimate power when united. It becomes apparent that a global threat is imminent, so Bruce Wayne sets off to assemble a team strong enough to combat it. Armed with the research confiscated from Luthor, the help of new super-friend Diana Prince (Gal Gadot), and the example impressed on him by the late Superman (Henry Cavill) Bruce must convince the three recruits, Barry “The Flash” Allen (Ezra Miller), Arthur “Aquaman” Curry (Jason Mamoa), and Victor “Cyborg” Stone (Ray Fisher) to join forces and fight as one to save the planet from Steppenwolf who intends to unite the mother boxes and create the “unity” and turn our world into a hellish landscape.

They are ALMOST there. It feels like they took a giant leap forward with Wonder Woman then a few steps back on this one. I really think Zack Snyder gets more hate then he deserves but it’s hard to argue that his influence is what’s holding these film’s back after seeing what Patti Jenkins did with Wonder Woman. It’s hard to know for sure what Joss Whedon’s influence over the film amounted to but I think it’s safe to say most of what ended up being extremely likeable about the film came from him. The biggest takeaway from the film is that they finally got Superman right in the end. He has become that smiling beacon of hope that he was always meant to be. The most important thing about that is that it shines through that Henry Cavill is a near perfect Superman when given the right material. He has the ability to be a hyper-intimidating demigod and a caring savior at the same time. The future is bright for the Man of Steel and if there was ever a resume worthy of a job it was what Whedon did with big blue in this film. The entire league for that matter is exceedingly great. Aquaman’s tough biker schtick just works and the guy shows that his charisma can rival Dwayne Johnson’s. Gal Gadot is just as perfect as ever and Ezra Miller, though he toes the line of being annoying, is great as a wide-eyed wisecracking Barry Allen (though Grant Gustin is still my #1). My favorite sequence came in the opening scenes when we first check in with the Dark Knight. Sure, the Nolan trilogy was great, but it wasn’t really comic-book fare. It was a comic book scenario adapted for the real world. Our introduction to Batman and the parademon’s showcases what a REAL comic-book Batman would look like on the big screen. Coincidentally this sequence also highlights that Zack Snyder can blow past expectations when he’s given the right topic to work on. Not only do we get some looks at detective Batman, something that surprisingly has been underplayed in almost ALL previous Batman outings. Snyder creates an environment that looks reminiscent of Tim Burton’s take with a more animated look to it. They only way to really describe it is that it looks ripped directly from a copy of Detective Comics. My favorite little touch of the movie comes thanks to Danny Elfman’s score which includes notes from the original Batman theme from the 1989 Burton film. It’s just perfect, if Snyder is to stay on in the DCEU it should be as director or at least visual consultant for The Batman, any detractors need to see this sequence first THEN tell me I’m wrong. The biggest surprise of the film had to be Ray Fisher’s Cyborg. The pre-release materials gave us every reason to believe he would be A) the most boring member of the league and B) the worst looking. That wasn’t entirely wrong, he is a studious computer like character…but hey he IS part computer after all, and yes when he’s full body Cyborg it does look bad BUT there was more to it then that. Fisher is pitch perfect in the part balancing out the dichotomy between programmed machine and emotionally broken man. He really projects the alienation and despair behind that one red eye. Now for the look, admittedly it does not look good in a full body shot, now that being said he spends most of the movie in a hoodie and sweatpants, it may sound silly but when his head is all that is visible it looks completely believable and real. I think it has something to do with how much detail they put into the body but when it’s kept simple it looks awesome. That’s about the only good thing I can say about the CGI which brings me to…….

The bad stuff and yes you KNEW there would be some. No one turns around a franchise completely with all of the same cooks in the kitchen. The most egregious of these issues is the CGI. We live in a world where proper CGI is a staple of good storytelling, if it looks bad or fake you are going to be pulled right out of the story. I don’t know why the DCCU hasn’t realized this yet, I mean after the crap show that was Doomsday in BvS my first order of business would be to find whoever does Marvel’s CGI and put them on retainer no matter what the cost. From the looks of things, they did exactly the opposite. Oddly the Para-demons look pretty good, but they totally dropped the ball on the two biggest subjects, the environment and the big bad. Steppenwolf looks completely unrealistic, like he was made out of Play-Doh by a less than advanced 5-year-old, unrealistic. On top of that background and set scenes really stick out as computer generated, the red sky look you undoubtedly noticed in the trailer sticks out as one such scene. In a way it’s cool because it makes it seem more comic-book like but in a world where Marvel can make you feel a movie about a Norse demi-god and irradiated green monster fighting may be real it seems like DC can do better. My biggest gripe is rather spoilery so I’ll try and keep it vague. I’m sure it’s no surprise to anyone that Superman does indeed return, but it’s how he returns that I want to talk about. The way it’s handled not only takes away from Superman’s God-like qualities, but it also is terribly dark and macabre. I literally could not believe the place they took it and right up until the events were happening I thought they were going to take it another way. To add insult to injury the end of BvS alluded to the fact that he was never really gone in the first place, what with the dirt rising up from his coffin. There were a lot of ways they could have handled it and, in my opinion, they managed to find the worst one.

An unqualified success? Not quite, but a vast improvement over the previous films (save for Wonder Woman of course). The ground work has been laid for what can be a very successful string of solo films in the future. There’s no weak link when it comes to the heroes themselves, assuming they can fix Cyborg’s look. Superman is back to the iconic smiling beacon of hope we all know and love, Batman is showing signs of the one angle we’ve never really seen fleshed out as the world’s greatest detective. Wonder Woman didn’t change and that’s high praise considering the amazing job they’ve done with her since moment 1. The Flash will never live up to the CWTV version but that was an impossible task anyway, what we have now is a slightly different take with the sarcasm turned to 11 and all of the important pieces in place. Aquaman is primed with a much-needed top-down makeover and a solid backstory lead in, and Cyborg…again, assuming they can fix the look, stands to be one of the more emotionally gripping heroes in comic-bookdom. This is all to say, quite simply, that some people will find the issues and pull on them, crying from the rooftops that the movie is horrible but they are, quite simply, wrong. The flick is fun, action-packed, and at exactly 2 hours long is paced perfectly, not slowing down from the opening gates. Are Marvel and DC on level ground now? No, not at all, but there is a glimmer of promise in the future of DC film that isn’t totally comprised of Gal Gadot’s Wonder Woman.
4 Out of 5 Pointy Eared Cowls