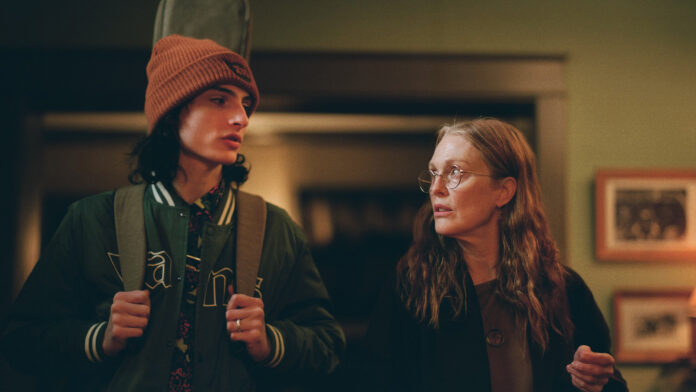 When You Finish Saving The World feels like it’s Jesse Eisenberg’s first feature. Though he steps away from an acting role in his directorial debut, his signature awkward demeanor is splashed all over the screen. Making his directorial debut at this year’s Sundance Film Festival, Eisenberg’s efforts fail to live up to the acting caliber of Julianne Moore and Finn Wolfhard.

Penning the script as well, Eisenberg utilizes cringe, comedy, and awkwardness to tell the story of an emotionally estranged mother and son. Evelyn is the classic “NPR activist mom” – white, upper-middle-class, trying to be woke. She runs a domestic violence shelter, work that her gen-z son, Ziggy doesn’t fully appreciate.

Instead, he’d prefer to serenade his online fanbase with folk-pop songs that lack real substance. Both call into question their worldview when they decide to forge relationships with other people to fill the hole of their own lacking one. For the shallow Ziggy that means trying to get more political for Lila (Alisha Boe), his crush at school, and for the overly blunt Evelyn, it means trying to bond with a 17-year-old boy (Billy Byrk) to get him into college. Unaware of how their word choice affects other people, the pair struggles to navigate their perceptions of themselves and who they want to be for others.

Wolfhard and Moore both pull off Eisenberg’s snappy dialogue. Capturing the obnoxious sincerity and lack of self-awareness Gen Z is labeled with, Wolfhard goes toe to toe with the Oscar-winning Moore, no easy feat. The latter once again dives fully into her character, emerging with a fascinating performance despite your dislike of the character.

However, with two stellar actors at the top of their game, it’s more obvious when Eisenberg’s script doesn’t work. Some Lines seem to come out of nowhere, with little sense or coherency. Other times the dialogue is laugh-out-loud funny. Teetering between the quirky and the mundane, the story’s tonal imbalance is more narratively confusing than intentional.

Directorially, Eisenberg is more clear-headed. Just when the script starts to lag, he plays with shadows or framing in a way that captures your attention, at times channeling the horror genre. Towards the end of When You Finish Saving the World, editor Sara Shaw utilizes fades in a way that feels refreshing rather than hokey.

Music plays a large role in the film, both narratively and sonically. Composer Emile Mosseri and Eisenberg find the perfect balance between classical, twinkling 8-bit orchestra pieces and folk-pop. It’s one of the year’s more eclectic soundtracks, but it’s one of the most cohesive parts of the film.

Despite strong performances from Wolfhard and Moore, Eisenberg’s When You Finish Saving The World falls into the trappings of a first-time director. You can tell the actor-turned-writer/director wanted to channel surrealist comedic filmmakers like Riley Stearns and Richard Ayoade, both of whom he was worked with. Instead, promising choices feel half-realized.

When You Finish Saving the World opens on January 20th.