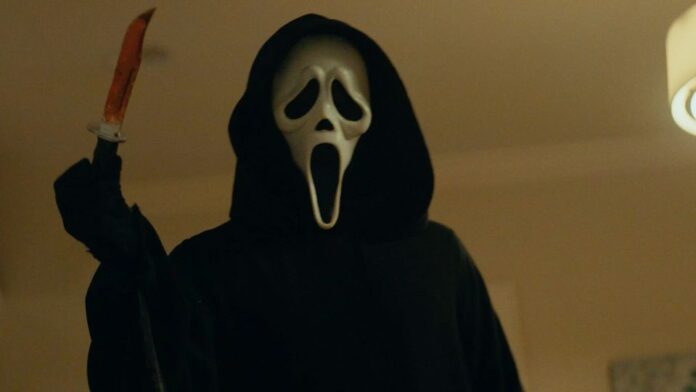 The killer is inside the house! And he knows how to use smartphone apps! Horror was very different when Scream first debuted in 1996 at the height of the teen comedy craze. It offered hot young stars deconstructing the slasher genre for laughs and killer effect, and the meta-commentary ran until the well ran completely dry with 2011’s forgettable Scream 4. And now eleven years later the franchise is going back to its roots both in substance and title, at a time when the landscape has been dominated by atmospheric A24 horrors like Midsommar, The Witch, and more.

The fifth Scream movie is one of those soft reboots studios love because it allows previous stars Neve Campbell, Courteney Cox, David Arquette, and Marley Shelton to return, while a brand new crop of young actors can get their first (and likely last) taste of the Ghostface killer who stalks Woodsboro. Of the newbies, Jenna Ortega, Melissa Barrera, Kyle Gallner, Mason Gooding, Mikey Madison, Dylan Minnette, Jack Quaid, Sonia Ammar, and Jasmin Savoy Brown stand out.

Behind the camera are co-directors Matt Bettinelli-Olpin and Tyler Gillett, best known for 2019’s hit Ready or Not. The duo aren’t fixing what worked the last time, either, bringing back that film’s composer Brian Tyler and co-writer Guy Busick. He’s joined by co-writer James Vanderbilt, known for Marc Webb’s The Amazing Spider-Man movies.