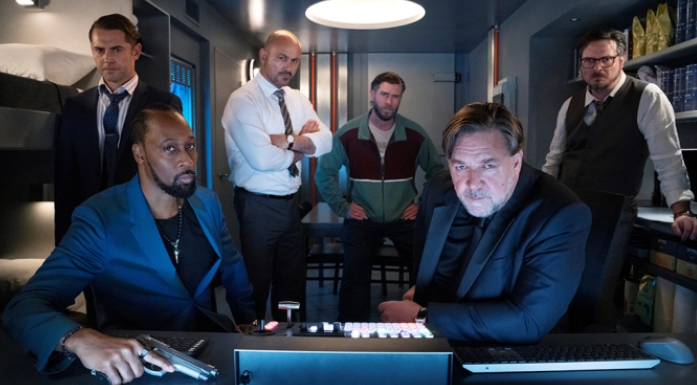 Academy Award Winner Russell Crowe bets an all-in hand with the new thriller Poker Face that he directs, stars, and co-written with Stephen M. Coates. The story centers around Jake Foley (Crowe), a tech billionaire and gambler who hosts a high-stakes poker game between his closest childhood friends. The winner would take home 5 million dollars in poker chips. However, more than hands are dealt during the poker game when secrets are exposed, revenge comes into play, and thieves break into his mansion in search of expensive art. Jake and his evening guests band together to survive a night of terror.

Poker Face opens with a rich sepia tone capturing the beautiful Australian landscape of clashing ocean waves and magnificent coastal cliffs. Jake and his friends spend time swimming and jumping off the cliffs. Boys are boys in nature. All are happy and having fun until one of them says they should bet all their cash in a round of poker. Foley loses and wants his money back to get medication for his sick mom. In return, he must jump off the cliff into the water below. Before he can take the challenge for the cash, bullies show up and demand it for themselves. The boys ask the bullies to play for it instead. Challenges are accepted – lessons learned.

Cut to many years later. Crowe narrates the transition of all their lives while in preparation for the reunion of the poker night. Somber news regarding his health lingers in the background. The information is so pivotal that it inspired the reasoning behind hosting such an event, ultimately changing their lives forever.

Jake Foley (Crowe) found his wealth by taking his love (and addiction) to play poker from tables to the internet. Jake and his childhood friends established the first online poker service. Then, branch out into creating military-grade surveillance software that allows them to read players and cards better. Sounds too damn good to be true – but ok. Not impossible – just extra.

It’s been years since the boys – now grown men have spoken. With time running out, Foley assembles his estranged yet longtime friends Michael (Liam Hemsworth), Alex (Aden Young), Paul (Steve Bastoni), and, eventually, Andrew (RZA), alongside his lawyer Sam (Daniel MacPherson) at his billionaire bunker. Details and terror unfold throughout the night. However, it’s not enough to draw any real intensity or thrills when and where they need to be. Also, are they really all the same age? Those gaps are way too obvious.

Foley’s marriage is ice cold, the relationship with his daughter doesn’t feel believable, and the backstory to his first wife’s death comes across as hollow and disconnected. Foley also brings in sexy card dealer Penelope (Elsa Pataky) for the game. Who is she to him; why the giant body tattoo? Additionally, the film includes a heavy influence of Australian art and artists. Gorgeous ocean, cliffs, oil on canvas kind of work, so much more and Foley owns copious amounts of it.

I appreciate the respect and love for art incorporation. Other than Foley flashing his wealth via the priceless yet, stupidly expensive art – What did it have to do with the poker game- and the plot against the players? I suppose that point was needed considering the extra twist – shocker (eyeroll). Clearly, Crowe has a passion for art. Respect. The film still has too many unanswered questions and no feng shui. I did love the scene with the shaman. Definitely the best part (character, lines, and relevance) of the entire movie.

Poker Face is a fair comparison to a psychedelic trip into the mind of a dying man looking to right the wrongs in his life. Unfortunately, the film unevenly borders on a lackluster thriller of a rushed hand at poker with a too-good-to-be-true kind of ending. Bluff called- it’s a shit deal. Not a winner for me. The featured art is.

Poker Face is in theaters and On Demand now.