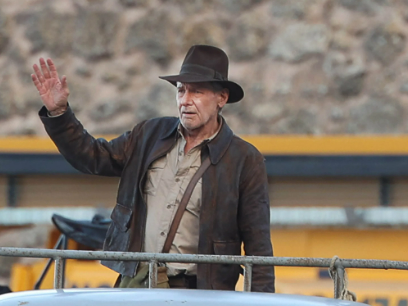 When it comes to rolling back the clock on our favorite actors and actresses with Hollywood’s new favorite toy “De-Aging” the results usually leave something to be desired. There’s the whole “Uncanny Valley” of it all, where you look at the footage and know that, aesthetically, it looks almost perfect but there’s always that one thing you can’t put your finger on that makes it…wrong. If anyone can’t get around that and truly make the process seamless it’s going to be ILM (Industrial Light & Magic) the VFX company started by George Lucas to support Star Wars and has been at the forefront of technological innovation in film since, (As a quick side note, if you haven’t seen it Light & Magic, Disney+’s documentary on the company is a great watch).

ILM’s latest challenge is turning Harrison Ford back into a strapping 30-something for the upcoming Indiana Jones 5. Empire Magazine revealed via their exclusive issue devoted to the film, that ILM has been heavily involved in the opening scene of the upcoming adventure turning the dial back to show Indy infiltrating a Nazi castle in the 40’s. That’s alot of responsibility on their shoulders, the only film or film franchise that depends more on the opening scene is James Bond. It sounds like their new techniques are hitting the spot though, according to the Fedora’d one himself, who is known as a straight shooter (if not somewhat crotchety) in interviews Harrison Ford had the following to say upon seeing the finished footage, “This is the first time I’ve seen it where I believe it…It’s a little spooky. I don’t think I even want to know how it works, but it works.”

The film itself is shaping up to be a return to form for the franchise. I was a little worried upon seeing that it would focus on the space race of 1969, immediately thinking that we were returning to the world of little green men. Thankfully though, that opening scene in the Nazi castle is more then just a cool little throwback. Indy will be battling the Nazi’s once more and they’ll be lead by, who I imagine, will be one of the best Indy villains yet, Mads Mikkleson as Voller, a Werner Von Braun stand in. If you’re wondering how he’s going to battle Nazi’s almost 30 years after the fall of the Third Reich I beseech you to do some research onto who the US was employing as their rocket scientists during the 60’s, specifically check on Operation Paperclip. The last 10 years have seen a flood of media dealing with the US’s employ of former Nazi scientists so it’s good to know Dr. Jones will be socking them in the jaw for the good of all.

‘Indiana Jones 5’ First Look: Harrison Ford Is Back For One Last Adventure