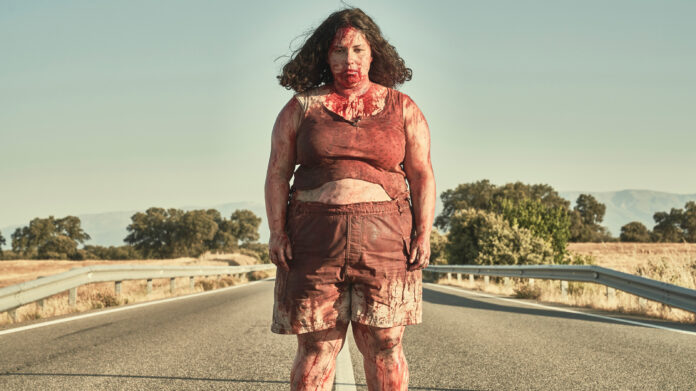 There are plenty of revenge fantasy thrillers out there, but few get the kind of acclaim that Piggy received at Sundance earlier this year. The Spanish film about a bullied overweight girl who finds common cause with a serial killer is arriving just in time for Halloween, and a new trailer for it is here.

The film was written and directed by Carlota Pereda, with Laura Galán in the lead role of Sara, and Richard Holmes as El desconocido, the killer who brutally kidnaps the clique of girls tormenting Sara.

Cortland Jacoby saw the film for us at Sundance, and compared it favorably to Carrie, praising the lead performance by Galan and Pereda’s violent visuals.

Buzz around this one has been through the roof, and is only going to escalate with Magnet Releasing and Alamo Drafthouse teaming up on a limited theatrical run on October 4th. Piggy then hits VOD on October 7th. It will also play at Fantastic Fest this weekend on September 25th.

With the summer sun beating down on her rural Spanish town, Sara hides away in her parent’s butcher shop. A teenager whose excess weight makes her the target of incessant bullying, she flees a clique of capricious girls who torment her at the town pool, only to stumble upon them being brutally kidnapped by a stranger, who drives off with them in his van. When the police begin asking questions, Sara keeps quiet. Intrigued by the stranger — an interest that’s mutual — she’s torn between revealing the truth and protecting the man who saved her.

‘The Strangers’ Remake In The Works From Director Renny Harlin, First Of Planned Trilogy