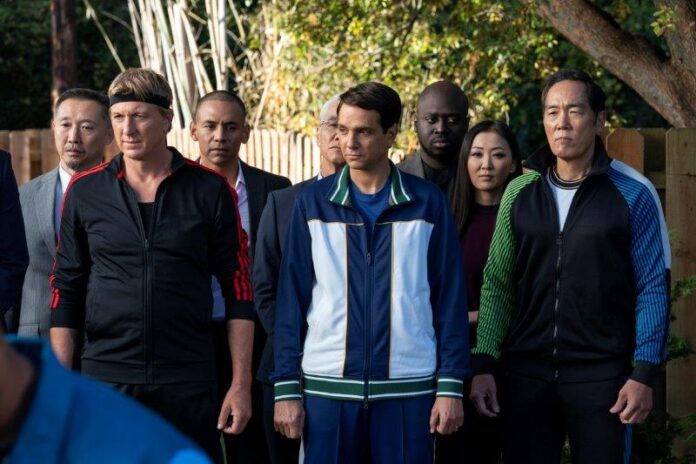 As I have said before, and before, and before: Cobra Kai is a friggin unicorn! There is no reason on earth why a sequel to a film that many people thought was “cheesy” and was released almost 40 years ago should be so fantastic! Cobra Kai blew reviewers and viewers away almost immediately after its YouTube Red debut in 2018. Cobra Kai focused on the “villain” Johnny Lawrence (William Zabka) instead of Daniel, the original The Karate Kid hero (Ralph Macchio), and gave us a memorable show that not only dove headfirst into the nostalgia well, but also had pitch-perfect drama, comedy, and story that made us fall in love with it. Netflix, the king of streaming, was more than delighted to pick up this show after YouTube opted to stop producing Original Programming after season 2 and keep this dojo running! Cobra Kai, now in its fifth season, keeps reminding you that it has no business being this intriguing, engrossing, and much fun!

When Terry Silver’s (Thomas Ian Griffith) Cobra Kai defeated Daniel and Johnny’s Eagle Fang/Miyagi Do dojo team in the All Valley Karate Tournament, they were forced to concede defeat and shut down their dojos. This happened at the end of the previous season. In addition to assuming control of Cobra Kai from John Kreese (Martin Kove), Terry Silver falsely accused Kreese of a felony and effectively seized control of the karate school, with immediate plans for a large expansion to take over the entire Valley. Johnny’s former student (and essentially adopted son), Miguel (Xolo Mariduea), departed the Valley to go for his father in Mexico as Daniel continued to hatch plans to stop Terry Silver. Now without his dojo, he would have to do it himself, so he gets his friend/former enemy Chozen (Yuji Okumoto) to take down Terry Silver and Cobra Kai by any means necessary.

Johnny is prepared to leave karate and the never-ending high school rivalries that have consumed his life, while Daniel and Cozen are developing elaborate plans within elaborate plans to try and figure out how to stop Terry Silver. Johnny travels to Mexico to hunt for his new student, mentor, and son who ran away from home to Mexico to try to find his father. Johnny, being Johnny, believes it will be simple to travel to Mexico and easily locate a child by the name of Miguel, but discovers that it is not that simple to do so. Along with him, he brings his real kid Robby (Tanner Buchanan). The only issue is that Robby and Miguel still don’t exactly get along, which adds to the stress. Xolo Mariduea was filming the future Blue Beetle movie for the DC Extended Universe, so at first, I thought Miguel going to Mexico was a way to get him off the show. However, it appears that Miguel is still a major character in Cobra Kai. The trip to Mexico is more of a diversion to further develop the interplay of personalities between Robby, Johnny, and Miguel.

The children of the Valley are all dealing with the fallout from last season’s All-Valley Karate Tournament while Daniel and Chozen are conspiring and Johnny is looking for Miguel. Samantha (Mary Mouser), Daniel’s daughter, is having trouble dealing with the self-doubt that has resulted from her defeat of Tory (Peyton List). Tory, on the other hand, is aware that Terry Silver used his power and money to influence the tournament referee, and she is aware that she didn’t actually win. She must decide whether to reveal Terry Silver’s treachery or stick with Cobra Kai since she has now become the “champion of the Valley.” Former bullied kid Kenny (Dallas Dupree Young) now is full of confidence and has turned into a Cobra Kai bully as well, and his role is expanded for this season. When Terry Silver pushed Stingray (Paul Walter Hauser) to implicate Kreese in Stingray’s personal beating by Terry, Stingray had to adjust to life in prison at the same time. Even if we have spent the last 38 years teaching ourselves to despise John Kreese, it’s impossible to help but feel sorry for him.

Cobra Kai is a show that is evolving with the kids, and this is something that is quite obvious right from the first episode. No longer as these young, new, and, um, so young faces. The show has made the decision to develop in step with them as a result. I was truly shocked by how many f-bombs were used during the concert. Ralph Macchio’s “fuck Cobra Kai” will always stick in your mind since we all remember how cool and collected “Daniel-San” was over the previous 30 years. Higher risks are involved. The violence in the combat scenes in the last episode is shocking-yet-satisfying because now there are weapons there.

We can’t mention this season of Cobra Kai without mentioning the performances of two actors whose roles were elevated this season: Thomas Ian Griffith as Terry Silver and Yuji Okumoto as Chozen. Griffith plays Terry Silver as a mustache-twirling villain and dials it up to 11 in every scene. He ought to be absurdly ludicrous, yet the structure of the program makes it work flawlessly. The same goes for Yuji Okumoto as Chozen. We remember Chozen from The Karate Kid Part II and his guest appearances in past seasons of Cobra Kai, but now as a series regular for season 5, he really gets a chance to shine. One unexpected aspect is how humorous Chozen is throughout the season, but at the same time, he flexes his dramatic muscles when the situation calls for it, whether it’s him getting into a fight while inebriated or getting emotional while inebriated a short while afterward.

Naturally, this is Cobra Kai, and William Zabka as Johnny remains a national treasure. He goes through a lot of changes over the season, showing his growth. Once again: where is William Zabka’s Emmy?!? Like Chozen, Johnny can be very humorous when the situation calls for it and incredibly tragic without skipping a beat. Ralph Macchio has a little bit more to do this season since his mission to eliminate Terry Silver pushes him a little too far, which is a positive aspect of Cobra Kai this season. At this point, Ralph Macchio and William Zabka can both perform these roles in their sleep, but they continue to impress season after season.

Nevertheless, Cobra Kai wouldn’t be Cobra Kai without elaborating on the mythology of The Karate Kid movies. In an age of ceaseless reboots and “requels,” Cobra Kai and the Creed films, in my opinion, are the quintessential examples of how to correctly execute nostalgia. Both Cobra Kai and Creed progress an existing plot and pass it on to the next generation, doing it as a labor of love for the franchises’ pre-existing movies that weren’t regarded as “great” in the process. This season of Cobra Kai extends on The Karate Kid III (a poorly regarded movie), and improves the plot, much like Creed did for Rocky IV (another poorly received movie). It makes you want to watch The Karate Kid III again, especially because it uses archival film to create its signature flashbacks when necessary throughout the season. Paying homage to The Karate Kid III wouldn’t be complete without mentioning Johnny 2.0: Mike Barnes (Sean Kanan), who makes a comeback this season. I can’t discuss the twists and turns that occur with Mike Barnes since Netflix has a red scope aimed at me, so I’ll just say that he is also fantastic and that his story is engaging, unexpected, and well-written. Fans will also adore a few other Easter Eggs from The Karate Kid III that show up as well.

As previously indicated, Cobra Kai should not work as well as it does. Although it seems absurd to make a 30-year-old sequel to a long-forgotten film (Top Gun: Maverick did it awesomely as well), damn if it doesn’t succeed yet again! I have to stop being repeatedly amazed that Cobra Kai is so damn close to being flawless in its engagement and execution at this point as they have now been doing it for 5 seasons. The only reason that this show doesn’t pass with flying colors is there is a key scene in the final episode that doesn’t work as well as intended, but otherwise, they show once again that this show has no business being so damn good!!!