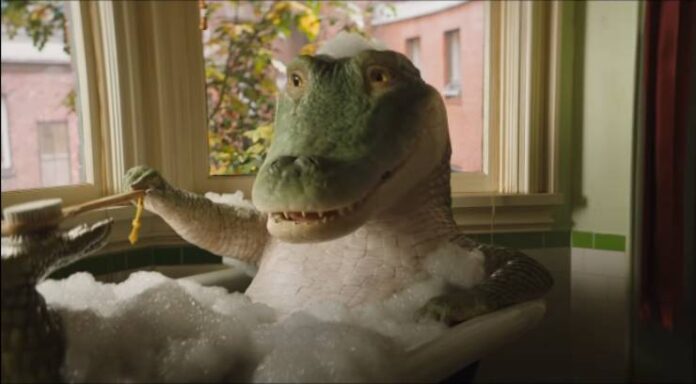 Sure, we’ve entered the fall season and this is the time when serious dramas tend to take over. But just for a couple of hours, take a break from all of the aspiring awards contenders and spend some time with a singing crocodile who sounds like Shawn Mendes.

In the new trailer for Lyle, Lyle, Crocodile, singer Shawn Mendes voices the titular croc in a live-action adaptation of the beloved book by Bernard Weber.  Javier Bardem, Constance Wu, Scoot McNairy, Brett Gelman, and Winslow Fegley star in the film about a New York City family whose son befriends a singing crocodile named Lyle. When Lyle is threatened by a grumpy ol’ neighbor, the family must band together with Lyle’s owner to save him.

Young Lyle sorta looks like the Geico gekko. If he offers us 15% off our car insurance I’ll assume it’s not a coincidence.

The film is adapted and directed by Office Christmas Party duo Josh Gordon and Will Speck. Also featured are brand new songs by La La Land and The Greatest Showman team of Benj Pasek and Justin Paul.

When the Primm family (Wu, Scoot McNairy, Winslow Fegley) moves to New York City, their young son Josh struggles to adapt to his new school and new friends. All of that changes when he discovers Lyle – a singing crocodile (Mendes) who loves baths, caviar and great music-living in the attic of his new home. The two become fast friends, but when Lyle’s existence is threatened by evil neighbor Mr. Grumps (Brett Gelman), the Primms must band together with Lyle’s charismatic owner, Hector P. Valenti (Bardem), to show the world that family can come from the most unexpected places and there’s nothing wrong with a big singing crocodile with an even bigger personality.