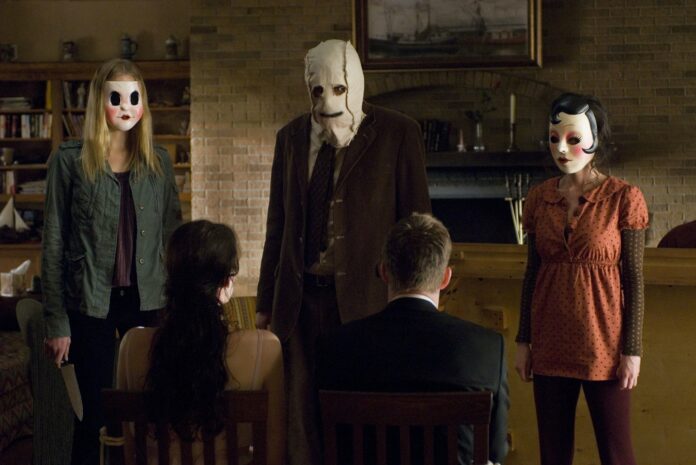 2008’s The Strangers is just about a perfect little home invasion flick. Written and directed by Bryan Bertino and starring Liv Tyler and Scott Speedman, it centered on a couple who are attacked in their vacation home by three masked invaders. Inspired by the real-life Manson Family murders, the film was a sleeper hit with $82M on a $9M budget. It also inspired the 2018 sequel, The Strangers: Prey at Night which was also good but less of a hit. In short, it probably doesn’t need a remake, much less one so soon. But that’s what we’re getting anyway from an unusual source.

Veteran Die Hard 2 and The Long Kiss Goodnight director Renny Harlin is set to direct a remake of The Strangers for Lionsgate that’ll be the first of a planned trilogy.

The cast is already set, as well, with Madelaine Petsch (Riverdale), Froy Gutierrez (Cruel Summer) and Gabriel Basso (Hillbilly Elegy) attached to star. The plot isn’t much different, either. Petsch and Gutierrez play a couple who travel cross-country to start over in the Pacific Northwest. Vehicle trouble forces them into an AirBNB that is then attacked by three masked strangers.

The script is by Due Date writers Alan R. Cohen and Alan Freedland. Make of that what you will.

Look, as a guy who worships at the altar of Harlin and some of the classic action films he’s done, he hasn’t made a good movie in ages, including 2021’s dismal The Misfits. His hiring does not inspire much confidence in this being a serious project, but then stranger things have happened.  He at least sounds game for the challenge…

“My mother instilled the love of movies in me through the world of Hitchcock and other masters of suspense and horror. My breakthrough to Hollywood happened with the success of A Nightmare on Elm Street 4,”  Harlin said to Deadline. “It is only fitting that I get to return to my favorite genre with the incredibly well written trilogy of The Strangers. The characters and the storyline are all grounded in reality and offer me an endless tapestry of haunting visuals in bringing these movies alive.”