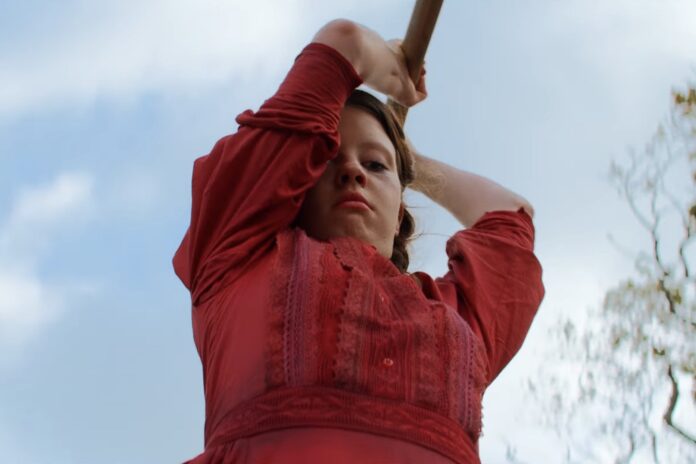 We could be watching the emergence of one of the great, true scream queens of all-time in Mia Goth. We’re talking Jamie Lee Curtis level stuff that she’s doing right now with Ti West, who is also at the height of his gory powers with the B-movie horror X, and now its equally entertaining follow-up, the prequel Pearl. With the recent news that West and Goth have already completed work on a third film, titled MaXXXine, we could also be looking at one of the best trilogies to hit this genre in a bloody long time.

Pearl is a very different film from X, which was inspired by grindhouse horror movies of the ’70s. On the other hand, the middle movie in this apparent trilogy is a technicolor wonder, straight out of The Wizard of Oz. It’s appropriate for the fantasy that exists within the mind of Pearl (Goth, reprising the role she has quickly made unforgettable), who in 1918, sixty years before the events of X, is a girl longing to leave the limited confines of the Texas farmhouse she shares with her stern mother (Tandi Wright) and invelid father (Matthew Sunderland). West, who shot both movies in New Zealand at the height of the pandemic, captures a bit of that paranoia by setting this one during the worst of the Spanish Flu epidemic, with everyone in town wearing familiar-looking masks.

Pearl’s parents are German immigrants who know a thing or two about hardship. Her mother refuses to suffer her daughter’s fanciful dreams of escape to become a dancer in the Hollywood movies that she sneaks out to see. She performs vivid routines in front of the farm animals, all named after her favorite movie stars. Every now and then, Pearl…well, she kills something. Something nobody will notice. With her husband Howard away fighting in the war, Pearl is also very lonely. She makes friends with a sketchy but cute projectionist (David Corenswet), who has ideas of his own about the kind of movies Pearl should be starring in.

The screenplay co-written by West and Goth together, offers the actress an incredible platform in which to show her range. Goth delivers song and dance numbers, unleashes Pearl’s pent up sadness and rage at her restrictive mother, while also expressing the girl’s deep isolation and desire for a greater life. It’s truly a remarkable performance. Goth is no stranger to this genre. In fact, she seems to almost exclusively be a horror actress at this point, and honestly, she’s just so damn perfect for it. She has this unique ability to be so innocent that we let our guards down and cheer for her, while also terrifyingly brutal in a way that is shocking.

This being a Ti West film, the kills are vicious and with only one exception he makes sure we experience every bit of them. The bulk of the story taking place at an isolated farmhouse, you can imagine the blunt-edged trauma that Pearl is able to inflict. But for a bit of fun there’s also Pearl’s favorite swamp and the alligator that lurks within. The violence is backed by a surreal score that’s like something from the end of the rainbow, while the vibrant color scheme is perfect when the blood starts gushing. The dreamlike sequences combined with Pearl’s often frenzied outbursts are very Harley Quinn-like in the way they’re expressed. These two could be kindred spirits.

Pearl is a much slighter film than X, however. It takes a very long time for things to pick up as we watch Pearl wallow in her misery. There’s also not a lot that truly deepens our understanding of the character. We got the gist pretty quickly that the older version of Pearl was jealous of the young folks and so she killed them. Here, we get confirmation of that, while the other parts of her backstory don’t add much. She’s a compelling character largely because Mia Goth is so mesmerizing you can’t take your eyes off of her, which makes the holding shot during the closing credits so damned satisfying. That we get to see her one more time in this world that West has created is a treat I hope we won’t have to wait long for.