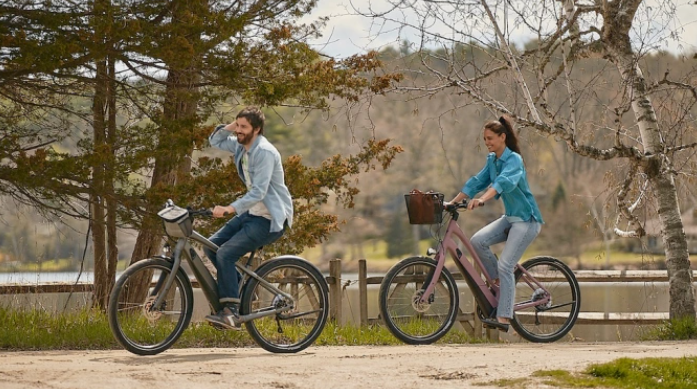 Alone Together is the sophomore directorial debut of veteran actress Katie Holmes who got her rise by starring in the TV series Dawson’s Creek which ran from 1998 to 2003. She writes, produces, and stars in this low key rom-com that takes place in the early days of Covid lockdown. New York is led by the direction of Manhattan’s then Mayor Bill Diblasio and primarily by Governor Andrew Cuomo. Their recorded and deeply familiar voices from those 2020 days can be heard throughout her film. Uncertainty was rising as rapidly as case counts but her film is focused right at the beginning stages of lockdown before anyone really knew just how bad and how long it would last.

Holmes stars as June, a New York food critic who manages to escape the city thinking that her boyfriend John (Derek Luke, American Refugee) will be joining her in rural upstate New York and away from all the noise and people. However, her romantic getaway backfires when major transportation outlets start canceling and she finds herself taking a two hour ride in a Lyft to their booked AirBnB alone. John messages her along the way that he will stay in the city to look after his parents. Her two week getaway plan goes from bad to worse when she discovers that the AirBnB has been double booked with disheveled but cute Charlie (Jim Sturgess, Geostorm).

The two butt heads at first but as any typical rom-com story goes, it’s not long before June and Carlie warm up to each other and discover more about themselves along the way. The concern and fear of Covid gets more serious and the two come to realize that the pandemic might just drag on a little bit longer than expected. Despite what truly was and is still an ongoing concern to this day, the duo do their best to adapt to their isolated getaway and make the most of their limited and suddenly changed lifestyles. Alone Together is a Vertical Entertainment film and also stars Zosia Mamet and Melissa Leo.

As spring begins to unfold around them, June and Charlie make the most of the sudden break in their typical daily routines and develop an unexpected intimacy as they bond over their goals, ambitions, new daily routines that also include Covid precautions and, of course, their past relationships. The pair have comfortably adapted to stepping away from what their lives used to be and learn to grow into newfound individuals who enjoy each other’s company as well as what they want to do once the pandemic has passed. The devastating effects of Covid and people of their past catches up and unfortunately impacts the two of them as well.

Alone Together, although sincere, is a tough film to watch considering the pandemic is still going on to this day. Nevertheless, this whole ongoing war is slowing down except people are still carrying fresh wounds from it. An upside to the lockdown brought some people closer together however and more often the case it physically, mentally, and emotionally tore people apart. The acting is fairly decent and the chemistry between Holmes and Sturgess is pretty good. The dialogue felt like an over reach that clumsily tries to connect to viewers. The film does its best to shine love and hope during a time of darkness and despair only to fall flat. The narrative revolves around two individuals who are fortunate to form a close connection excluding the billions of people impacted, and negatively to boot, by the Covid pandemic. Not a winner for me.

Alone Together is currently playing in theaters and will be available on Digital/Demand July 29th.