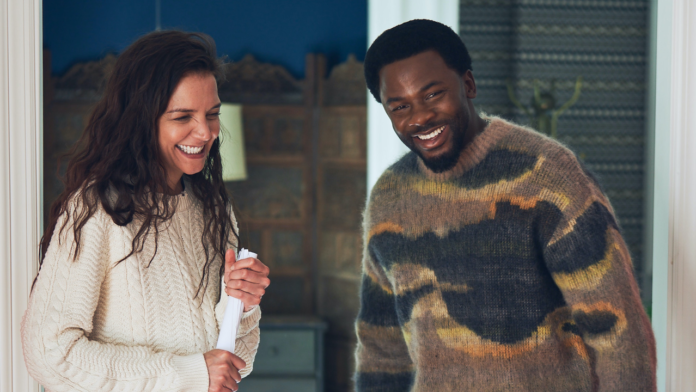 Imagine back to the start of the pandemic. Practically the entire world was shut down due to the COVID-19 outbreak, and those who were in relationships had no idea what it was going to be like being stuck in the same place with their significant other 24 hours a day. Then, a few months later, every bored director made a movie about love in the time of COVID. It was tiresome. Does anyone want to go back to those kinds of stories? Well, Katie Holmes sure hopes you do, because love under lockdown is the premise of her new film, Alone Together.

Written, directed, and starring Holmes, Alone Together stars the actress as June, a food critic who mistakenly double-books the AirBNB meant for her and her boyfriend John, played by Derek Luke. But when John has to split to deal with a family matter, June makes a connection with Charlie (Jim Sturgess), the newly-single guy who is also staying there. With the pandemic forcing everyone to stay inside, June and Charlie find surprising intimacy as they discuss the future.

The film is Holmes’ sophomore directorial effort after 2016’s All We Had, which I thought was quite an impressive start to her filmmaking career.

Also in the  cast are Becky Ann Baker, Zosia Mamet, and Melissa Leo. Alone Together has its world premiere at Tribeca on June 14th, followed by a theatrical release on July 22nd, then digital and VOD on July 29th.