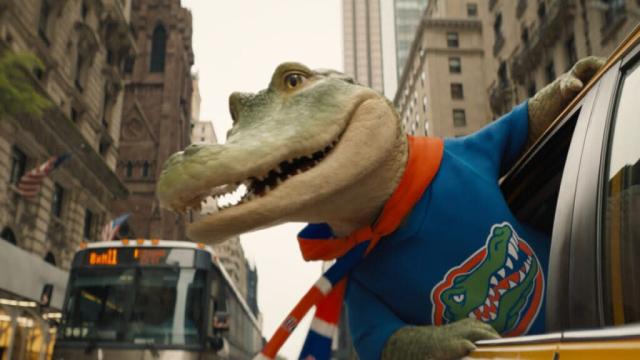 Hey look, if we’re willing to accept families that take in a talking bear from Peru and a big red dog, we kinda have to accept anything, right? So don’t you dare scoff at the premise of Lyle, Lyle, Crocodile, which is about a New York City who adopts a singing crocodile.

Ridiculous as that may sound, the cast is actually quite good. Constance Wu,  Winslow Fegley, and Scoot McNairy lead the human cast, with Shawn Mendes voicing Lyle the singing crocodile. Also in the cast are Stranger Things actor Brett Gelman and Javier Bardem.

The film is based on the popular children’s book by Bernard Waber, and directed by Will Speck and Josh Gordon. They’re known best for Blades of Glory, Office Christmas Party, The Switch, and other raunchy comedies.

When the Primm family (Constance Wu, Scoot McNairy, Winslow Fegley) moves to New York City, their young son Josh struggles to adapt to his new school and new friends. All of that changes when he discovers Lyle – a singing crocodile (Shawn Mendes) who loves baths, caviar and great music-living in the attic of his new home. The two become fast friends, but when Lyle’s existence is threatened by evil neighbor Mr. Grumps (Brett Gelman), the Primm’s must band together with Lyle’s charismatic owner, Hector P. Valenti (Javier Bardem), to show the world that family can come from the most unexpected places and there’s nothing wrong with a big singing crocodile with an even bigger personality.