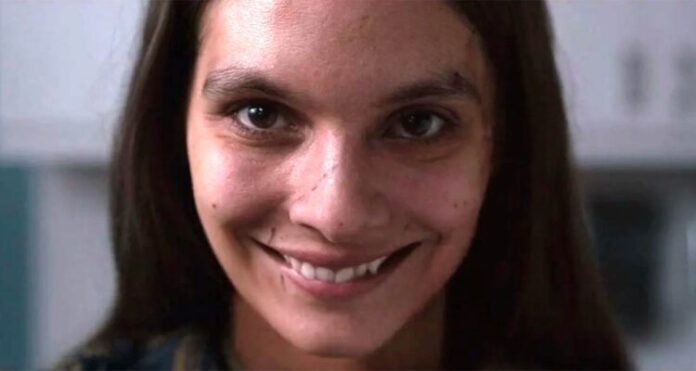 A smile isn’t just a smile. While flashing a smile at someone often can be a sign of great happiness, if the Joker came up to you with a big ol’ wide grin you wouldn’t be so into it. Especially in the realm of horror, a smile is often the last thing someone sees before getting dead. In short, smiles can be super creepy, and that’s what we’re all in for in Parker Finn’s new film, Smile.

Based on Finn’s SXSW award-winning short film Laura Hasn’t Slept, the film centers on psychiatrist Dr. Rose Cotter, who believes she has been plagued by something supernatural after witnessing a traumatic incident with a patient.

Leading the cast is Sosie Bacon, yes the daughter of Kevin Bacon, along with Jessie T. Usher, Kyle Gallner, Robin Weigert, Caitlin Stasey, Kal Penn, and Rob Morgan. What a great group Finn has put together. Stasey was actually the star of Finn’s short, but has a different role to play in the feature-length version.

Smile opens on September 30th. This seems like it would be a perfect Halloween release, so hopefully it’ll stick around long enough to make it there.

After witnessing a bizarre, traumatic incident involving a patient, Dr. Rose Cotter (Sosie Bacon) starts experiencing frightening occurrences that she can’t explain. As an overwhelming terror begins taking over her life, Rose must confront her troubling past in order to survive and escape her horrifying new reality.