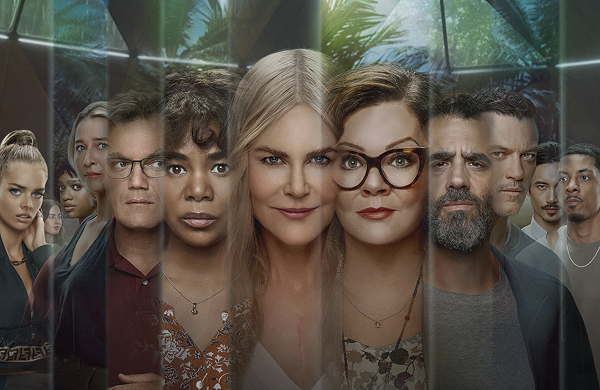 The wellness industry is one that’s very lucrative and intriguing at the same time. The idea that someone pays ridiculous amounts of money to go to a retreat to have some much-needed therapy/R&R might seem alien to most, but that doesn’t mean that it’s not something that people don’t do to help better themselves. Hulu’s latest miniseries Nine Perfect Strangers (based on the book of the same name by author Liane Moriarty, who also wrote Big Little Lies) explores a wellness retreat that is not exactly what it appears to be.

Tranquillum House is a wellness resort headed up by Masha Dmitrichenko (Nicole Kidman). She promises that if you give her ten days, she will transform you in ways you could not imagine for the better. Working alongside Delilah (Tiffany Boone) and Yao (Manny Jacinto), they run a tight ship and promise to improve the lives of the people who join their complex in search of bettering themselves.

Joining Tranquillum House for the upcoming session is a wide range of different people. The only thing they have in common is that they all have significant issues affecting them that they would like to resolve. Frances (Melissa McCarthy) is a writer who unfortunately has self-esteem issues both personally and professionally. It doesn’t help that she was the victim of a catfish scam by a guy she met online that milked her for some money. Carmel (Regina Hall) is a woman who doesn’t believe in her own self-worth after her husband cheated on her and left her for another woman that her children are now calling “mom.” Tony (Bobby Cannavale) is a former football player who after an injury became addicted to painkillers and his life fell apart. Lars (Luke Evans) arrives at the resort because of his apprehension about adopting a child with his husband, but he also has a hidden agenda. Lottery winner Ben (Melvin Gregg) and his social media influencer wife Jessica (Samara Weaving) are having marital discord. The Marconi family consists of father Napoleon (Michael Shannon), mother Heather (Asher Keddie), and daughter Zoe (Grace Van Patten) whose family has fallen apart after the sudden and tragic suicide of their son Zach (Hal Cumpston).

Talk about a stacked cast! Right off the top, this cast absolutely brings their A-Game and delivers throughout Nine Perfect Strangers’ first season. While Melissa McCarthy has dipped into dramatic performances in the past (and even gotten Oscar nominations for it), she’s still known as a comedian. She continues to stand out with her performance as Frances, especially as she and Tony grow close during their stay at the wellness resort. Bobby Cannavale also delivers in his performance, especially his interactions with McCarthy. Each member of the Marconi family delivers exceptionally strong performances as they continue to process the grief of their son’s death while at Tranquillum House. Mega props go to Regina Hall as well. Her character Carmel appears to be the most damaged, which allows her to completely own every scene she is in. It’s hard to imagine that she’s the same person from those Scary Movie films way back when. In fact, come awards time, it’s going to be very hard for the Academy to pinpoint any one actor to be deemed worthy of taking home the gold as everyone completely shines.

The only complaint performance-wise (surprisingly) would have to be from Nicole Kidman as the leader Masha. While overall, she seems to be doing a great job, it’s her Russian accent that is severely distracting throughout Nine Perfect Strangers’ eight-episode run. There is some development from her character towards the end that allows her to deliver a great performance, but that accent doesn’t necessarily work for her.

As the newly arrives guests come to Tranquillum House, it becomes quickly clear that Masha has a VERY unorthodox approach to helping people at her resort. Instead of the usual meditation, yoga, and general relaxation that most wellness resorts are accustomed to, Masha drugs the hell out of her attendees. And we’re not talking about prescription drugs either. Secretly dosing people with mushrooms and other psychedelics would be a massive red flag and land one in jail immediately. But that’s the gist of Nine Perfect Strangers. Masha has built up an operation of massively dosing her attendees in the hopes of expanding their minds to help them process their trauma. Surprisingly it seems to work for many of the attendees, even those who have never taken drugs ever are receptive to it once they see the results. But Masha is also doing it for her own nefarious purposes that Nine Perfect Strangers reveal by the end of the season.

In addition to trying to help everyone deal with their problems, Masha has her own problems to deal with. She’s being stalked by someone from her past that wants her dead. While this is a drug-fueled self-help story, it’s also a mystery about a potential killer who wants to kill Masha. Unfortunately, when the payoff is revealed as who the would-be assassin is, it comes across as silly and another added layer of manufactured drama for the sake of drama, and it’s dismissed rather quickly as well.

Towards the end of Nine Perfect Strangers, it feels as though the ending is rushed. It could have possibly gone another episode or two to flesh things out and come to a more satisfying conclusion. Characters go from calm and rational to agitated and insane by the next scene. Maybe it’s the drugs, maybe it’s the show’s writing. That said, you cannot deny the cast and their performances throughout the series. It’s currently billed as a Limited Series from Hulu, but there is a montage at the end which shows what happens to each character, and it might be worth it to continue to explore what happened at Tranquillum House as its inhabitants.