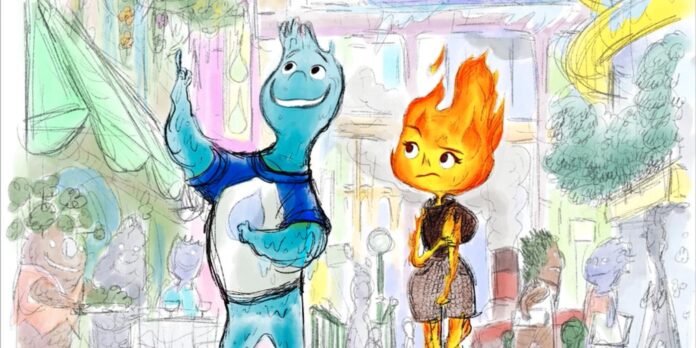 With the critical success of Turning Red in the recent past, and Lightyear the next big film on the horizon for Pixar, the famed animation studio is gearing up for what’s next. That would be Elemental, currently the only film on the lineup for 2023. While details on it remain scarce, concept art has been revealed for what could be the bounce back for director Peter Sohn.

Pixar has announced that Elemental, which had been an untitled mystery film until now, will hit theaters on June 16th 2023. The story follows “an unlikely pair, Ember and Wade, in a city where fire-, water-, land- and air-residents live together.” And as you can probably tell from the initial concept art, Ember and Wade aren’t just opposing elements, their personalities couldn’t be more different, too.

Sohn added, “My parents emigrated from Korea in the early 1970s and built a bustling grocery store in the Bronx. We were among many families who ventured to a new land with hopes and dreams — all of us mixing into one big salad bowl of cultures, languages, and beautiful little neighborhoods. That’s what led me to Elemental. Our story is based on the classic elements — fire, water, land and air. Some elements mix with each other, and some don’t. What if these elements were alive?”

So why does Sohn need to “bounce back”? His last feature was 2015’s The Good Dinosaur, and while outright failures are few for Pixar, that one is about as close as it gets. It was not well-received critically nor did it perform up to the usual Pixar standard at the box office.

But Elemental is an entirely new project, and Sohn is an immensely talented guy who has made a number of Pixar projects better.