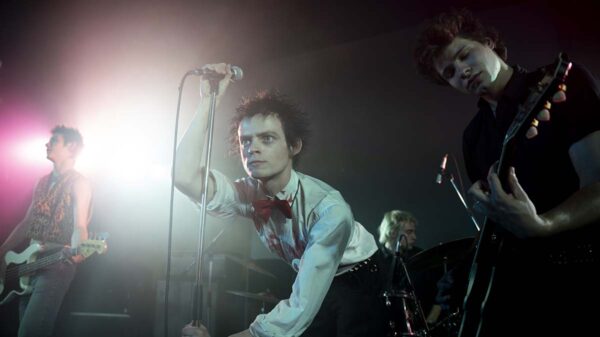 Danny Boyle’s last film, the charming Beatles comedy Yesterday, feels like a lifetime ago, as most things pre-pandemic do. Well now he’s back with the Sex Pistols series Pistol, that has been the subject of a legal dispute from former group member John Lydon. That’s cleared up, the show will hit Hulu as planned, and now the first trailer is here offering a look at the legendary punk band’s chaotic rise and fall.

The series is based on the memoir by band guitarist Steve Jones, who will exec-produce and be portrayed by Toby Wallace. Anson Boom, Christian Lees, Louis Partridge, and Jacob Slater play the rest of the band, while Maisie Williams co-stars as punk icon Pamela Rooke.

Boyle will direct all six episodes of the series, which was created by playwright and Baz Luhrmann frequent collaborator Craig Pearce.

Pistol will hit Hulu on May 31st.

“Pistol” is a six-episode limited series about a rock and roll revolution. The furious, raging storm at the center of this revolution are the Sex Pistols – and at the center of this series is Sex Pistols’ founding member and guitarist, Steve Jones. Jones’ hilarious, emotional, and at times heartbreaking journey guides us through a kaleidoscopic telling of three of the most epic, chaotic, and mucus-spattered years in the history of music. Based on Jones’ memoir “Lonely Boy: Tales from a Sex Pistol,” this is the story of a band of spotty, noisy, working-class kids with “no future,” who shook the boring, corrupt Establishment to its core, threatened to bring down the government and changed music and culture forever.