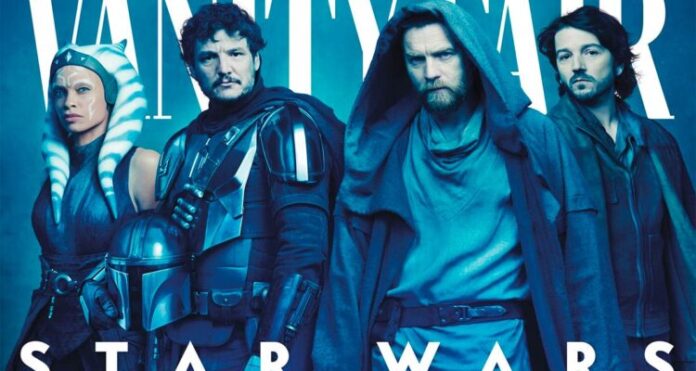 It’s about to get very busy for Star Wars fans. What’s interesting about the latest batch of release dates from Lucasfilm is that there’s virtually no mention at all of anything on the big screen. The galaxy far far away isn’t that far at all, it’s right there on the small screen.

So with only a couple of weeks until the premiere of Obi-Wan Kenobi, we’re seeing the playing field for the rest of 2022 and into 2023 with shows Ahsoka, Andor, The Mandalorian, and The Acolyte.

Coming up first this summer is Andor, with Diego Luna returning to the role of Rebel spy Cassian Andor. The series from Rogue One writer Tony Gilroy is described by Luna as an immigrant story, and it will explore Andor’s relationship with Rebel leader, Mon Mothma, played by Genevieve O’Reilly.

Following that in late 2022 is the anticipated third season of The Mandalorian. Pedrop Pascal returns as Din Djarin, who is reunited with Grogu, arguably the most heavily-merchandised character since the Minions.

That will be followed next year by another insanely popular character, Ahsoka Tano, with Rosario Dawson returning to lead the Ahsoka series. The rogue former Jedi’s story will likely pick up threads left from Star Wars Rebels‘ conclusion, involving the lost Ezra Bridger. Dave Filoni is writing and directing the series, with Peter Ramsey directing at least one. Natasha Liu Bordizzo stars as another Rebels character, Sabine Wren, with Mary Elizabeth Winstead in an undisclosed role. There are also rumors Hayden Christensen will return as Ahsoka’s former mentor, Anakin Skywalker.

And finally later in 2023 is The Acolyte, from Russian Doll creator Lesley Headland. The series, which will be led by Amandla Stenberg, has been desribed as an action-thriller with martial arts elements, and is set during the late High Republic, about 100 years pre-Skywalker Saga.

I’m surprised Lucasfilm didn’t wait until Star Wars Celebration to drop all of this info, but it’s good to have an idea when these shows are coming.