Amazon has built for itself a comfortable little cinematic universe, the Tom Clancy-verse, centered around John Krasinski’s Jack Ryan series. That has led to the Without Remorse film starring Michael B. Jordan as John Clark, and a potential Rainbow Six movie. And that universe continues to evolve, with the  core series coming to the end of its run, and the start of something new.

Deadline reports that Jack Ryan, soon to launch its third season, will conclude with season four which is shooting right now. Krasinski, who also produces the series with Amazon, Paramount TV, and Skydance, will return to wrap up his run as the badass CIA agent. While the end may be in sight, it’s unclear when as Jack Ryan season 3 has yet to be given an exact date.

Meanwhile, Amazon is also eyeing a spinoff series that would feature Michael Pena as another popular Tom Clancy character, elite sniper Domingo “Ding” Chavez. Pena will play the character in the Jack Ryan season 3 finale before becoming a regular character in season 4. Chavez also served as executive officer of Rainbow Six, so he could turn up there, as well, if that movie goes forward. In the novels, Chavez is also Clark’s son-in-law but it’s tough to see that plot point being used in this case. 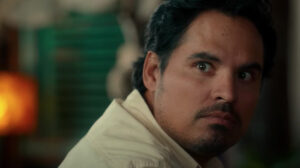 This will undoubtedly fuel speculation about Krasinki’s future plans. While he’s still guiding the A Quiet Place franchise and will likely return to direct the third movie, he also recently appeared in a rather huge film as a popular comic book character. That has led to some expecting Krasinski to continue on in that role, although there’s no clear indication he will. I’m just putting it out there that this timing is suspicious, and I don’t believe in coincidences.