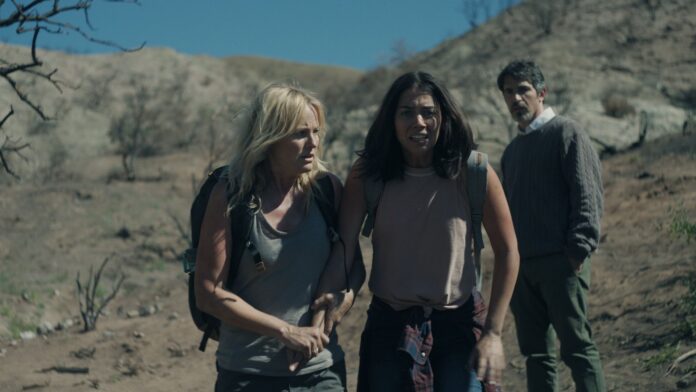 Jillian (Malin Akerman) and Blair (Lorenza Izzo) are taking their shot at freedom in The Aviary. The two of them have been trapped in Skylight, a cult that was once a source of comfort. They manage to get out of “The Aviary” – Skylight’s main campus that is isolated in the desert. Getting away was the first step, but now the two of them find themselves in the middle of the desert. Jillian and Blair only have a hand drawn map to guide them, plus Jillian’s survival skills she learned in the girl scouts. 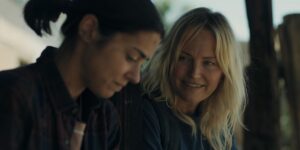 The two of them were able to take some supplies with them, but the bare minimum. A couple apples, some water, a few protein bars – enough to last a handful of days. The plan is to get to the closest town of Gallup which is a couple dozen miles away. That is unless there are some unexpected detours. Once there, they can finally free themselves of Skylight and its leader Seth (Chris Messina). He needs to pay for what he put them through, and the Gallup police will know what to do. All they have to do is overcome a lack of supplies, 20-30 miles in the desert, and that sneaking suspicion that Seth is still in control. 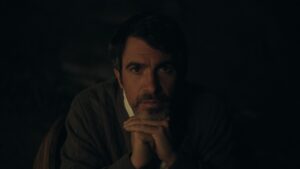 The Aviary is the feature length debut for Chris Cullari and Jennifer Raite who wrote and directed the film together. The Aviary is the latest in a long line of projects Cullari and Raite have worked on together. While The Aviary isn’t an entirely original film, it is different than the typical cult film. Yes, Seth and Skylight are mentioned throughout and play an important role, but the film is more than that. The Aviary focuses on the effects that this cult has had on Blair and Jillian. The experiences they have gone through and the damage that has been done. As many cults do, Skylight and Seth prayed on their vulnerabilities and then exploited them. 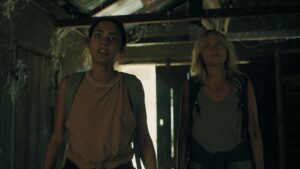 Cullari and Raite manage to have the audience invested in the characters almost off the jump. You find yourself truly caring about what happens to all the players involved, both positively and negatively. This is an impressive, and important, feat. With the film featuring only a small handful of characters, individual performances are vital and Akerman, Izzo, and Messina deliver. The acting is top notch and believable. The pain and despair Jillian and Blair have gone through is palpable and Messina’s calm presence is practically mesmerizing. With a clever script, the perfect touch of ominous music, and disorienting visuals, Cullari and Raite draw the audience in. The Aviary is a budget conscious thriller that doesn’t need all of the bells and whistles to be effective. Cullari and Raite weave a tense thriller that keeps you on the edge of your seat, wondering what twists are coming.