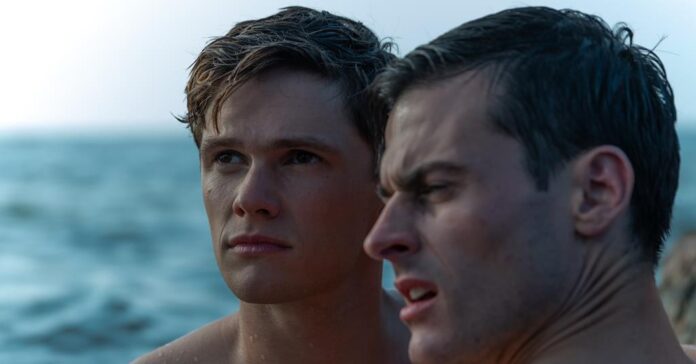 Forbidden lovers is not a new concept but in the hands of director and co-writer Peeter Rebane, the cliché feels fresh. Taking place in 1970s Soviet military, Firebird follows the relationship of two servicemen forced to hide their love from their superiors and eventually their friends and family. While straddling the line between cliché and grounded reverence, the film is a moving homage to a real relationship and so many others like it that die tragically too soon.

Tom Prior (Kingsman: The Secret Service)  plays real-life soldier turned actor Sergey Fetisov. While on base, he meets a fighter pilot named Roman (Oleg Zagorondnii) and is immediately intrigued by his presence. After a night at the theater, the two finally act on their feelings, despite suspicions from fellow and superior officers. As they grow closer over the years, they are almost caught multiple times, leading Roman to marry their mutual friend Lousia (Diana Pozharskaya). As the two pursue two very different paths, they must find a way back to each other before it’s too late.

Written by Prior and Rebane, the script perfectly captures the delicate and intricate relationship between Roman and Sergey. However, the dialogue is very heavy-handed, full of melodrama. At one point the two have a secret rendezvous in the Baltic Sea. Amidst kissing and handjobs, the moment leads to a literal climax when two fighter jets soar across the sky. The image is a bit obvious but Rebane’s mostly understated visuals keep the film grounded.

The chemistry between Prior and Zagorodnii is palpable but that is easy to do when you have two men making out who look like Greek gods. Though both give tender and heartbreaking performances, it’s the latter who is given emotionally more to do as Roman has more to lose. This is slightly stifled by blink-and-you-miss-it time jumps that plague the second act. It doesn’t have the same emotional payoff as a more contained plot.

Louisa’s story is muffled amidst the two main characters. At the end of the day, Roman and Sergey’s affair has consequences that impact her. Prior and Rebane’s script treats her like an afterthought for most of the film. However, Pozharskaya can stand her ground with the little she is given. She ends up giving a nuanced and captivating performance that stands out against Prior and Zagorodnii’s.

Firebird’s biggest asset is that it’s still a devastatingly relevant story. LGBTQIA individuals are still heavily persecuted in Russia to this day. Roman and Sergey’s beautiful and heartbreaking story feels even more tragic because it’s a reality so many hidden faces are still dealing with.

Firedbird is playing in select theaters. Watch the trailer below.