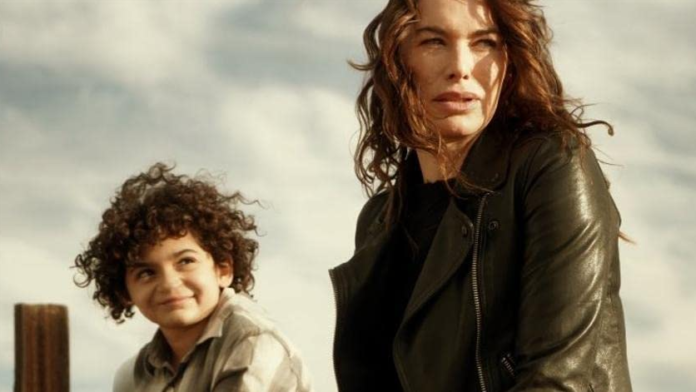 9 Bullets is a crime thriller written and directed by Gigi Gaston (Rip it Off) and stars leading lady and total badass Lena Headey. Headey is well known for her brilliant role as the all time cunning Cerseai Lannister in Game of Thrones. As fantastic an actor as Headey is and as much as I enjoy watching her onscreen, it wasn’t enough to salvage this film from being a clusterfuck of a hot mess. Writer/Director Gigi Gaston grew up inspired by Gypsy Rose Lee, a woman she had known growing up. Gaston had initially started writing the film under the title Gypsy Moon, which is the same name as Lena Headey’s character. Now titled 9 Bullets, Gypsy Moon (Headey) is a burlesque dancer who is taking a second chance at life by leaving her old job behind to write a book and go on a cruise. Her plans are interrupted when her young neighbor witnesses the murder of his family by them crossing paths with the local crime boss and her ex-lover Jack (Sam Worthington, Avatar). The film also stars Cam Gigandet (The Magnificent Seven), La La Anthony (Power), Martin Sensmeier (Westworld), and Barbara Hershey (Black Swan).

The film opens in Santa Clarita, California with Gypsy Moon heading to work to perform one last time. She dances seductively to a slow version tune of the classic Chistmas carol, Silent Night. Oddest of song choices but I think it’s around Christmas time as a later scene inside a diner had a decorated tree. Unfortunately the time reference is never acknowledged and most of the film takes place in west to midwest with absolutely no sign of winter weather so, this aspect made no sense to me. She receives a call from her neighbors who ask for her help as they are on the run for taking something of value from crime boss Jack (Worthington). Gypsy reluctantly agrees but as she is ready to hit the road herself, she discovers the neighbors young son Sam (Dean Scott Vasquez, Transformers: Rise of the Beasts) and his small dog named Moses hiding in her bathtub.

Knowing Jack’s goon squad would be after the boy to finish the job, Gypsy puts herself at risk as well by driving Sam to the closest living relative he has left. Gypsy reaches out to Jack and sets up a meeting to discuss sparing the boy’s life. She hopes to win favor by doing whatever it takes to get Jack to back off by taking advantage of his deep infatuation with her. It works and his qualm is squashed with the kid however, Jack wants to go after Gypsy for being involved. Another weird aspect to the film that made no sense but I think it has something to do with the fact that he is deeply obsessed with this woman, despite knowing very little of their backstory.

9 Bullets is a chaotic bore that has a messy timeline filled with holes. The acting is fine. Nothing notable or memorable but the real disaster is the feng shui of the film’s storyline.  Jack’s hitmen are always right on Gypsy and Sam’s tale; seemingly to easily know wherever they turn up. Even when states away but the trio of hitmen can never actually find them. Gypsy and Sam befriend another “dancer” along the way when they steal a car she’s sleeping in. Tasmin is also done with her dance life and all she wants to do is go home to see her mama. Tasmin (La La Anthony) is a great addition to the cast and I loved her personality but is only briefly featured in the film. I am left in further disappointment of not knowing if she ever got to see her mother.

Gypsy and Sam connect with her old friend Lacey (Hershey) while on the run. Another great addition to the cast (although brief as well) who utters the best line in the film, twice. I must add, Barabra Hershey looks absolutely stunning. Would love to have seen more of her character and to know her backstory. Headey and Dean Scott Vasquez have great chemistry together but the film itself is an unfortunate flop because it lacks a credible, let alone solid storyline. It’s a confused mesh of bad girl gone good with a limp crime thriller that includes a 90’s churchy softrock soundtrack and reminds me of films found on platforms like Crackle. As it turns out, makes total sense considering both are owned and distributed by Chicken Soup for the Soul Entertainment. Go figure and no offense. Not my cup of watered down tea and although the cast and acting is decent, I would avoid this film altogether.

9 Bullets opens in theaters and VOD on April 22.