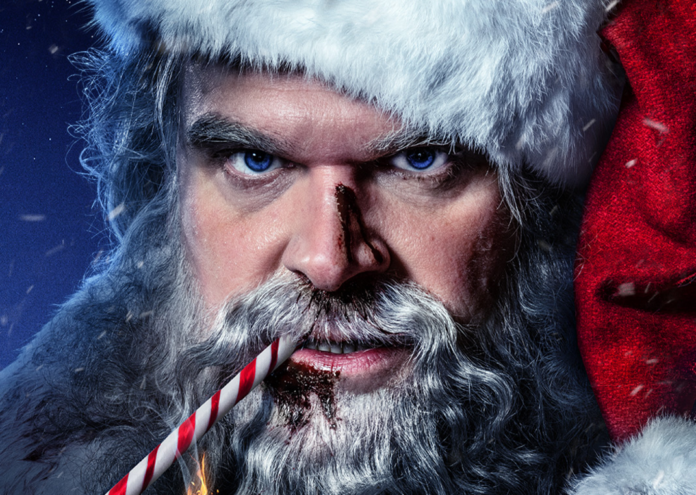 I’m old enough to remember when Hulk Hogan starred in the atrocious Santa with Muscles. Tough guys suited up as Santa is something that nearly always makes a fun movie, and now you can add David Harbour in the awesome Violent Night to the list. Although I would’ve been happy if they had renamed this Santa with a Dad Bod.

Violent Night is pretty much everything we hoped it would be from the moment those first promos of a bloodied up Santa first popped up. Directed by over-the-top filmmaker Tommy Wirkola of Dead Snow and Hansel & Gretel: Witch Hunters fame, the action is gory, explosive, and filled with holiday cheer! I loved it!

Harbour, channeling Billy Bob Thornton in Bad Santa, plays Santa Claus. Not some mall Santa, but the real deal. Chris Kringle himself. Jolly ol’ Saint Nick. But you wouldn’t know it. Santa is a drunk, who has lost the Christmas spirit as people have grown more spoiled and commercialism has ruined the holiday’s true meaning. But this is all just bellyachin’, right? Nah. Santa is almost never sober when soaring (and sometimes vomiting) in his sleigh, stuffing his face with Christmas cookies and milk while stumbling through homes like some thief in the night. If something doesn’t change, Santa has decided this will be his last Christmas.

Forget Frank Capra, the real holiday magic comes with a stockingful of blood, guts, and sledgehammers. Santa meets Trudy (Leah Brady), a young girl in the wealthy Lightstone family. She fully believes in Santa and the spirit of Christmas, even if the others in her family are spoiled and entitled. Her parents, Jason and Linda (Alex Hassell and Alexis Louder) are estranged and all Trudy wants is for them to be together again. Trudy’s grandmother Gertrude (Beverly D’Angelo), leads the clan with an iron fist, making her kids fight not only for her love but for a piece of their wealthy corporation.

When a gang of mercenaries with holiday-themed names, led by John Leguizamo’s Mr. Scrooge, takes the Lightstones hostage, Santa is the only one who can save the day. He’s got a naughty list full of bad guys and they’re all due for lumps of coal in their stockings. Or a straight-up ass kicking. Violent Night lives up to its title with insane amounts of grisly and comic violence. Wirkola is the perfect director for that combination, as his films tend to go way over the edge but always lean on being fun first. He shoots action like a lot of the old school filmmakers used to, which is appropriate because Violent Night often feels like it belongs in the Cannon Films library. The camerawork is clean and steady, putting Harbour in the best possible position and allowing us to see every horrific and hilarious act. While the script is by Pat Casey and Josh Miller, the duo behind the Sonic the Hedgehog movie, once the fighting starts you can see the heavy influence of producer and John Wick creator David Leitch.

Switching gears often, Violent Night draws inspiration as much from Die Hard as it does Home Alone. The only thing holding it back is the Lightstone family’s squabbling, which slows the momentum down to a crawl. We just can’t find any reason to care about them and the danger they’re in, even if it’s all meant to underline how pure of heart Trudy is compared to them.  Better are the moments when we learn more about Santa, his struggles with Mrs. Claus, and Ragnarok-esque flashbacks to his past as a legendary Norse warrior. Harbour is fantastic, basically playing a heightened version of his Hopper character in Stranger Things. Santa might look like a big ol’ grizzly bear, and he might talk a good game about how shitty things are, but deep down he’s actually a teddy bear. Er, a teddy bear who doesn’t mind turning those on his Naughty list into literal pulp, mind you.

Also great is Leguizamo as Mr. Scrooge. Always reliable, as he was recently in The Menu as well, Leguizamo might actually be better playing bad guys than when he’s just being funny. He does arrogant heelwork better than almost anybody, and he’s surprisingly legit when forced to face Santa in a one-on-one showdown.

Violent Night is the yuletide blast we were hoping for, with Harbour’s performance one that he is likely to be remembered for a very long time. Actually, I would be surprised if this is the last we see of Harbour as Santa Claus. This is a movie built for multiple sequels that will explore Santa’s dark past. Christmas is always going to be under threat, right? Make these an annual tradition and give us all one more thing to look forward to during the holiday season.