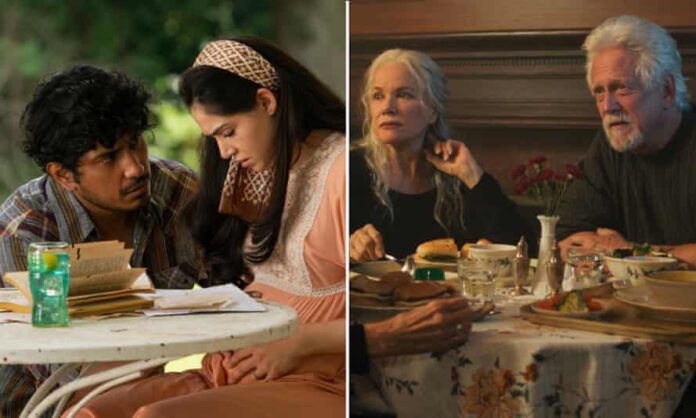 ‘Welcome to the Blumhouse’ is a film series consisting of theme-related anthological thriller-horror stories that started in the fall of 2020. The series is developed and produced by Blumhouse Productions for Prime Video as Amazon Prime Originals. The first two installments of the 4-movie Halloween 2021 addition kicked off on October 1st.  The second two installments , ‘The Manor’ and ‘Madres’ are here and keeping up with the Halloween horror spirit. 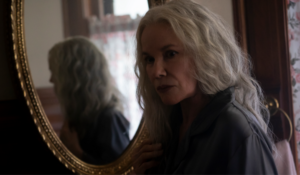 The Manor is the third installment of Welcome to Blumhouse 2021, directed and written by Axelle Carolyn, and about a gothic tale of terror with a modern twist. When a mild stroke diminishes her ability to care for herself, Judith Albright (Barbara Hershey, Black Swan, The Entity) moves to Golden Sun Manor, an assisted living facility with a sterling reputation. A malevolent force preys upon the residents of a sleepy nursing home and Judith does her best to tell everyone she sees about what she saw. But despite the best efforts of the staff, and a budding friendship with fellow senior Roland (Bruce Davison, We Still Say Grace, Along Came the Devil 2), strange occurrences and nightmarish visions convince Judith that a sinister presence is haunting the massive estate. As residents begin to die mysteriously, Judith’s frantic warnings are dismissed as fantasy. Even her devoted grandson Josh (Nicholas Alexander, Adam, Good Girls) thinks her fears are the result of dementia, not demons. With no one willing to believe her, Judith must either escape the confines of the manor, or fall victim to the evil that dwells within it.

The Manor centers its story around a group of elderly folks being driven mad in the home their families have left them in for care. Although there are some creepy sightings of a tree man/demon that terrorizes guests that are interesting, the movie moves slowly and lacks any gorish-ness. Judith (Hershey) and the other elderly people in The Manor desperately want to hang onto their youthful version of themselves and desire to stick around a while longer. Barbara Hershey is stunning but there are moments of the film that didn’t add up. Living residents are on a scheduled timeline of death but the manor wouldn’t take new patients even though rooms are empty. Overall, the film lacks any real thrill or excitement and is a pass for me. 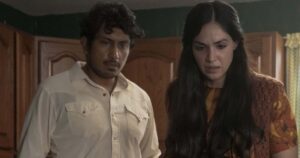 Madres is the fourth and final installment of the Welcome to the Blumhouse 2021 Halloween edition that is written by Marcella Ochoa and Mario Miscione and directed by Ryan Zaragoza. Beto (Tenoch Huerta) and Diana (Ariana Guerra), a young Mexican-American couple expecting their first child, move from L.A. to a small town in 1970’s California. Beto has been offered a job managing a farm while Diana plans to write a book. Diana is Hispanic however feels isolated from the Spanish speaking small town community. She grew up in a busy American city and was taught not to speak her Spanish native language. She becomes plagued with confusing nightmares and to pass the time, explores the rundown ranch where they reside. Diane finds a grisly talisman and a box that contains belongings to the previous tenants. Over time, her discoveries will lead her to a truth much stranger and more terrifying than she could have possibly imagined.

Madres has more thrill and horrific instances that unfortunately do not take place until the final 15-20ish minutes of the film. The film starts off relatively mellow and slowly builds intensity however, is very sluggish in the meantime. There are weird moments throughout the film that come across as glitchy and too dark to see. The film is centered around real life shitty medical practices that took place in America. Female immigrants were subjected and forced into tragic circumstances that were even recently brought back into practice here in America. The film may not project thrills right away, the true horror reveals itself at the end and should certainly be paid attention. Madres is the best out of the four films presented in this year’s Welcome to Blumhouse edition and is definitely worth a watch.