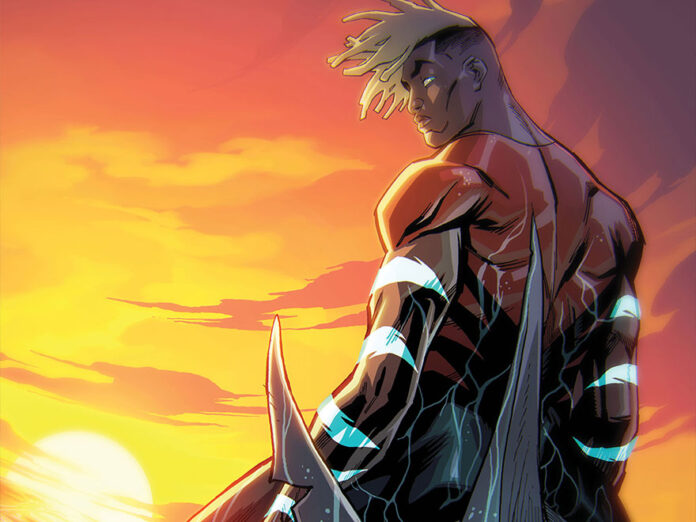 A common complaint about superhero projects is that when you get right down to it, they all sort of play out the same way. They have a similar narrative structure, bland villains, and predictable conclusions. Well, that’s certainly not something you’ll be able to say about You Brought Me the Ocean, a gay YA love story being developed for HBO Max that serves as an origin story for the superhero, Aqualad

Charlize Theron is actually producing this adaptation of graphic novel You Brought Me The Ocean by Alex Sánchez and artist Jul Maroh. The Aqualad character is typically seen as a sidekick or close associate of Aquaman. Originally developed for TV’s Young Justice cartoon, he was brought into the comics around the same time, becoming a major LGBTQ figure for being openly gay on the small screen and the page. Going by the names Kaldur’ahm and Jake Hyde, it would be revealed that he is the son of villain Black Manta. He also becomes Aquaman at a later point.

Jake Hyde doesn’t swim—not since his father drowned. Luckily, he lives in Truth or Consequences, New Mexico, which is in the middle of the desert, yet he yearns for the ocean and is determined to leave his hometown for a college on the coast. But his best friend, Maria, wants nothing more than to make a home in the desert, and Jake’s mother encourages him to always play it safe.

There’s nothing “safe” about Jake’s future—not when he’s attracted to Kenny Liu, swim team captain, and rebel against conformity. And certainly not when he secretly applies to Miami University. Jake’s life begins to outpace his small town’s namesake, which doesn’t make it any easier to come out to his mom, or Maria, or the world.

But Jake is full of secrets, including the strange blue markings on his skin that glow when in contact with water. What power will he find when he searches for his identity, and will he turn his back to the current or dive headfirst into the waves?

The live-action, one-hour dramedy series may or may not be connected to the wider DCEU. That much is still unclear, but it would be an interesting addition to the canon. It joins other DC Comics shows in the works for HBO Max including a spinoff of The Batman starring Colin Farrell as Penguin and another centered on Arkham Asylum, plus a Green Lantern series. [Variety]