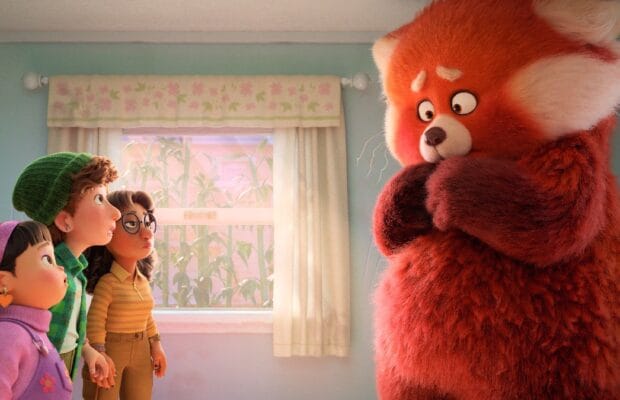 Pixar hasn’t released a movie into theaters since Onward in 2020, which seems like a lifetime ago. While some have bristled at films like Luca and Soul going exclusively to streaming, it hasn’t dulled the studio’s quality in the least. And the same can be said for their latest gem, Turning Red, which might be the most unique and quirky film they’ve ever done. Not saying it’s on the level of a Toy Story or The Incredibles, but Pixar has  found a way to make the story of an adolescent Asian girl living in Canada in the early 2000s accessible and fun for all ages. Those who are quick to dismiss Turning Red might want to loosen up.

Director and co-writer Domee Shi pulled liberally from her own Chinese-Canadian upbringing, and yes, Turning Red does feel a little specific at times. But so what? We applaud other filmmakers for using their personal experiences to craft a story that’s special to them but could resonate with others, and Shi has done that here. Set in 2003, the story follows 13-year-old Mei (Rosalie Chiang), a silly, confident, brilliant girl, the kind who does cartwheels at a whim then goes to school and aces all the tests. She has her own clique of friends; Miriam (Ava Morse), Abby (Hyein Park), and Priya (Maitreyi Ramakrishnan ), who like her are all very easily excitable. This goes extra when talking about their favorite boy band 4* Town…which has 5 members but who’s counting?

Mei’s life seems pretty perfect. She even loves working at the temple run by her parents, including her strict, perfection-seeking mother Ming (Sandra Oh), and easygoing father Jin (First Cow‘s Orion Lee). That is until Mei is humiliated so horribly that she loses control and, this is where shit gets really weird, she turns into a giant, furry red panda.

Red pandas are interesting. They aren’t like regular pandas. They sorta look like foxes, but they eat like pandas and have habits similar to a feline. In Chinese culture they are viewed as symbols of peace, which is why it’s so funny that Mei’s panda side only comes out in moments when she is feeling the most chaotic. Her mom, God bless her, thinks Mei finally got her period which is funny because of the obvious mistake but also because the movie’s title screams “puberty” and lessons about a girl’s growth into a woman. And Turning Red is about that most awkward time but also independence vs. tradition, loyalty, and of course, getting around the parentals to see your favorite boy band in concert.

I’ll be the first to tell you that Turning Red probably wasn’t made with me in mind, and so some jokes land more than others and others might fly over my head. But everyone can relate to that crazy period when we want to be ourselves but fear going against what our parents want. Mainly what’s great about the film is the animation style, clearly inspired by anime and the works of Studio Ghibli, with exaggerated expressions and features, drawn in a way that’s more cutesy than we typically get from Pixar. It might not work for all of their films but it’s perfect for this one where pocket monsters (remember those??) and bright colored outfits were the norm. The kaiju/Power Rangers-inspired finale is also perfect for the era and as overwrought as its protagonist. But then, aren’t all teens Mei’s age a little dramatic? It also goes a long way in humanizing Ming by telling her heartbreaking story, with Pixar taking the big emotional swings they are so good at. They do get plenty of help from the score by Ludwig Goransson, combining Chinese elements with more traditional American music. The earworm-worthy tracks by 4* Town? Composed by Billie Eilish and her brother Finneas, so you have them to blame if something gets stuck in there.

In some ways, Turning Red is an expansion of Shi’s terrific short, Bao, which also dealt with an overprotective mother. Shi, the first woman to ever solo direct a Pixar movie, has a grip on this particular theme, but there’s so much going on that you can’t wait to see what she does for them next.