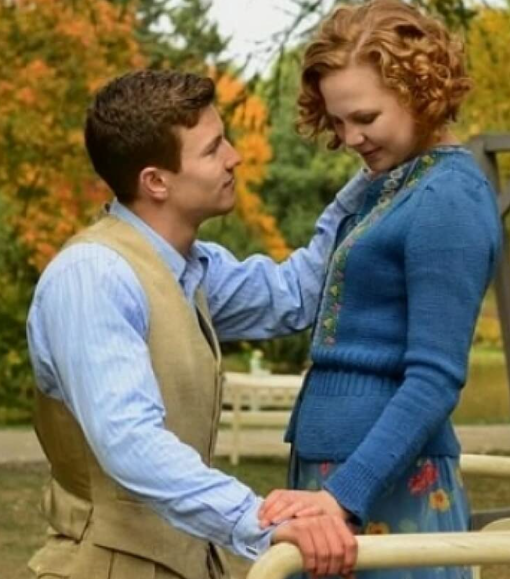 I’ll Find You is a romantic period drama film that follows star-crossed lovers Robert and Rachel in mid-20th century Europe during the chaos of World War II. Young Violinists Rachel Rubin (Ursula Parker) and Robert Pulaski (Sebastian Croft) meet while attending a prestigious music school in Lodz run by head mistress Lena (Connie Nielsen, Gladiator, Wonder Woman 1984, Nobody). Rachel (Parker) carries a strong personality that strikes people the wrong way, including young Robert. However, she is an incredibly talented violinist who enjoys outplaying Robert every chance she gets. Robert grows more and more annoyed at her behavior and goes as far as denying any sort of friendship as he is Catholic and she is Jewish despite the growing love he has in his eyes every time he looks at her. The feeling appears to be mutual as it’s through their budding friendship that Rachel shines light on a newly discovered talent of Robert’s when they are introduced to Lena’s (Nielsen) German brother and Opera singer/star Benno Moser (Stellan Skarsgård, Dune, Chernobyl, Good Will Hunting). Given his new found and highly gifted talent, it wasn’t long before Robert left the music school in Lodz for Opera training in Italy and the romantic kindle between Rachel and Robert had come to an awkward end.

When Robert (Leo Suter, Vikings: Valhalla) returns in 1939, Rachel (Adelaide Clemens, The Great Gatsby) is surprised and standoffish towards him as she can still see his love for her burns just as strong as the day he left. She rejects his requests to get together revealing that she is engaged to and is heavily persisted by her parents into marrying the more suitable option, David (Jacob Ifan, A Discovery of Witches). David is well off and can offer a home safety net in the loom of the rising Nazi regime. All Rachel (Clemens) would have to do is give up playing her violin and performing to become a quiet and subservient housewife. The flame between Robert and Rachel instantly reignites when she realizes how much she genuinely still loves him, despite her family’s plan to join David’s in Switzerland. Unfortunately, the Nazis’ reach Polish soil during the night foiling any plans of escape. Robert (Suter) was able to quickly locate Rachel and her family and with the help of head mistress Lena, took them to a hidden room at the music school.

The Nazi’s prove to be relentless in their endeavor, even planting their own spies throughout Poland and it’s not long before Rachel’s family is exposed and taken to Auschwitz concentration camp. One the deadliest camps constructed by Hitler’s regime. Robert vows to find Rachel no matter the toll and sets out to conquer the film’s title and point by joining the resistance and training under Opera star, Brenno Moser (Skarsgård) in Germany who also has deep connections with the German Military. Robert learns that Rachel has been placed in an orchestra and forced to play the violin for Nazi General Huber (Stephen Dorff, Blade, Deputy, Embattled) who also keeps them close to wherever he is. Moser is able to set up a singing performance with himself and Robert with General Huber’s personal prisoner band to get as close as possible to Rachel.

Their performance is a memorable success however, they eventually catch the attention of Nazi soldiers when Moser is overly adamant at requesting to pull Rachel from General Huber’s (Dorff) orchestra to travel under his. General Huber, Rachel, and his literal band of prisoners transferred to another concentration camp meanwhile, Nazi soldiers arrive at Mosers home when his relationship and intentions with certain German officers came to light. Robert barely gets away and ends up working on a farm for a family who lost their son in the war. British soldiers march through and pass the word that the war is over and camps are being liberated. Robert packs up and heads to the last place Rachel was known to be at. He discovers that she has survived but trying to connect is difficult since Rachel has been changed by the war. The greatest challenge they now face is wondering if the love they once shared could co-exist with the pain and turmoil experienced from WWII.

I’ll Find You is directed by Martha Coollidge, an American and former president of the Directors Guild of America. She is most known for her directing work on Valley Girl (1983), Real Genius (1985) starring Val Kilmer, Rambling Rose (1991), and The Prince & Me (2004). This poetic romance drama is co-written by Academy Award-winner David S. Ward and produced by Fred Roos (The Godfather: Part II, Apocalypse Now) while being filmed in historic areas of Poland. For a film about talented musicians, the soundtrack does not disappoint. From artists’ songs played by the Prague Philharmonic Orchestra such as Chopin, Bizet, and Gluck, to stunning musical performances from Academy Award winning film composer Jan A.P. Kaczmarek (Finding Neverland). There’s no doubt that the locations filmed, cinematography, soundtrack, the attention to effort and detail, and chemistry Leo Suter and Adelaide Clemens display on screen are fantastic. It’s filmed well however, there are some points that didn’t sit well with me.

The film’s story comes across more like a Nicholas Sparks romance novel made for TV. Although powerful, the Holocaust felt like a backdrop to their love story and it didn’t really capture the emotional and physical distress of surviving it. Only at the end of the film is a slim reminder of the utter devastation that grotesquely ended the lives of millions across Europe. Even then, the film circles back to the love story involving Robert and Rachel keeping what caused their whole ordeal in the first place to the background. Stellan Skarsgård is absolutely wonderful playing Brenno Moser but his character is almost rarely seen. He plays an integral part to the whole process, especially to Robert and Rachel’s situation but little is known about him and his mission. It’s a shame more of his character wasn’t more involved in the story line but still enjoyable, nonetheless. The only other thing that I don’t care for is the obvious dub over when Stellan Skarsgård and Leo Suter “sung” for their characters. It is off putting and subsides the realism of their tasks. Overall, I’ll Find You is a heartbreaking yet charming story of love, loss, and the spirit of determination to survive, even in a world forcefully plagued with hate and darkness. Donning an awesome international cast, I recommend giving this film a watch.

I’ll Find You is currently in theaters.