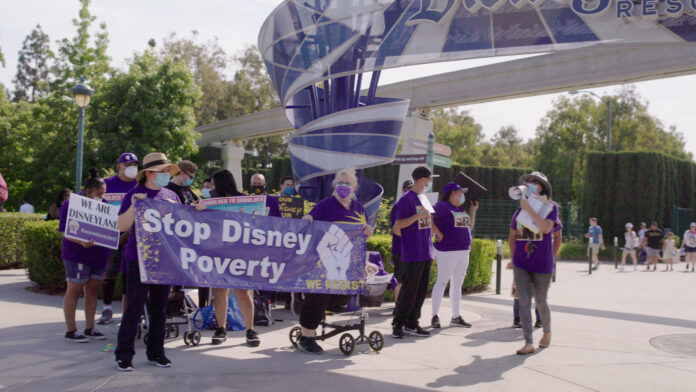 The one thing Disney Parks prides themselves on is how wonderful their staff aka castmembers are. The parks are known for their cleanliness and their willingness to fulfill any reasonable request for their guests. Unfortunately, as Abigail Disney and Kathleen Hughes point out in their documentary The American Dream and Other Fairy Tales, the Walt Disney Corporation is less than inclined to accommodate their workers.

With Abigail Disney, the call is coming from inside the house. The grandniece of Walt and the granddaughter Roy O Disney, Abigail has no involvement in the company other than being a stockholder. In the past 5 years or so, Abigail has been an advocate for wage equality, calling out the family business on the new and social media. A long-time producer (her other film Brainwashed: Sex-Camera-Power is also at the 2022 Sundance Festival), Abigail steps in front of the camera and in the director’s chair for her second feature, to visually document the income inequality that her own family has benefitted from.

For a business like Disneyland, one that sets the theme-park standard in terms of guest service, the notion that many of their employees need food stamps and can’t afford housing is against the company’s image. At one point two employees lead Abigail around a food pantry completely dedicated to Disneyland Workers. Most Disney employees make $15 an hour, despite Anaheim’s living wage being over $9 above that. Abigail combines facts with personal testimonies from real Disney employees to drive the point home that it is abhorrent that the new American way is for a CEO to make 500-700 times the amount their everyday workers do. The documentary doesn’t even mention that the same employee treatment is happening at Walt Disney World in Florida.

But Abigail and co-director Kathleen Hughes try to have their cake and eat it too. While the former acknowledges her privilege, she fails to note that her current net worth is $120 million. She advocates for lower wages for CEOs on Capitol Hill but only after we see her getting her hair and makeup done. A lot of the problems with capitalism and trickle-down economics most Americans know and Abigail and Hughes are not saying anything new. The co-directors also have an irreverence for the way Abigail’s grandfather and granduncle ran the company, barely mentioning their own failings as businessmen.

With a pervasive “Disney Adult” culture and entire businesses dedicated to Disney travel and accommodation, Mickey Mouse is not going away anytime soon. It was reported in August 2021 that more than 1 million people were Disneyland annual pass holders, who made up 50% of Disneyland’s attendance in 2019. However, there has been a public outcry since the company raised prices and eliminated inclusive perks like transportation and fast passes late last year.

A 2021 study found that the 2013 documentary Blackfish, which focused on the inhumane treatment of orcas in captivity at SeaWorld, greatly contributed to the theme park’s stock price falling by 33% a year after its release. That film was popularized by word of mouth. While it’s hard to imagine a powerhouse like Disney Parks being taken out completely by this documentary, it is plausible The American Dream and Other Fairy Tales could lead to actual change. Combined with the Disney experience being more financially out of reach for the everyday American, the Disney company may need more than pixie dust to save themselves.