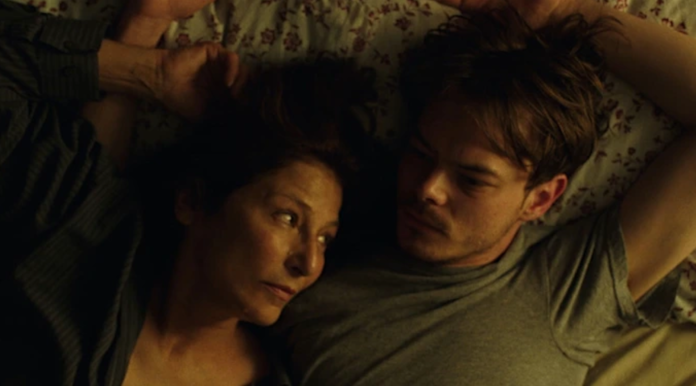 No Future is a dark drama film that drops right into the story and takes viewers on a wild ride full of grief, loss, and the struggle to find coping mechanisms through it all. Will (Charlie Heaton, Stranger Things) is a recovering addict who now maintains a quiet, settled life. He has a steady job, attends NA meetings, and has a supportive, understanding girlfriend Becca (Rosa Salazar, Alita: Battle Angel) that he’s recently met and starting to fall for. But beneath this façade is someone haunted by a troubled past. One that comes back to light when his estranged friend Chris (Jefferson White, Yellowstone) fatally overdoses after Will brushes him off the night before.

Haunted by past and present guilt that’s piling on, Will reluctantly returns home. A place he’s worked so hard to leave behind. Mostly because his father, Phillip (Jackie Earle Haley, Preacher) blames Will (Heaton) for the addiction that’s caused so much chaos. Not to side track but there is a noticeable feature with his character that stands out and can be rather distracting. Will (Heaton) fluctuates from a long bowl cut hair style to a chic trim. Not that big a deal but still distracting considering there’s no change to the movie/story timeline. Will reunites with Claire (Academy Award nominee, Catherine Keener, Get Out), Chris’ (White) grieving mother. Claire carries herself with a quiet strength as she hides her sadness and anger from the world but the loss of her son and the blame she places on herself weigh heavily on her soul. She is vulnerable and desperate as she tries to find a means to cope with her overwhelming grief, sadness, and loneliness.

Will and Claire are instantaneously bonded by their shared emotions and together they quickly develop an intimate relationship. Their connection uncovers thoughts and feelings about themselves they’ve kept hidden from the world. The very feelings that Will refuses to share with Becca (Salazar) for fear that she will abandon him. Between the two, they hope for healing the wounds of their pasts and mending their damaged lives. However, the awkward truth of their relationship and what went down the night Chris went to see Will eventually comes out. As secrets are finally and uncomfortably revealed, new and already fractured hearts will be shattered all over again.

No Future is written and directed by Andrew Irvine and Mark Smoot. The pair created an intelligent and a fairly accurate depiction of people consumed by an array of heartbreaking emotions and circumstances as they attempt to come to terms with the darkness that surrounds them. The film can come across as long and drag on in parts but Keener, Heaton, and Salazar convey outstanding performances of emotionally stricken people coming to terms with themselves and their loved ones. Keener and Salazar are a great pair on screen when it comes to the dark and twisted and it’s great to see them together again since Netflix’s Brand New Cherry Flavor release this year. No Future may not be a feel good, happy ending kind of film but it’s amazing at pulling back the curtain to a traumatic truth of what really goes on in the minds, hearts, and bodies of people fighting through real life dilemmas. Definitely worth a watch.

No Future is playing in theaters and on VOD nationwide.