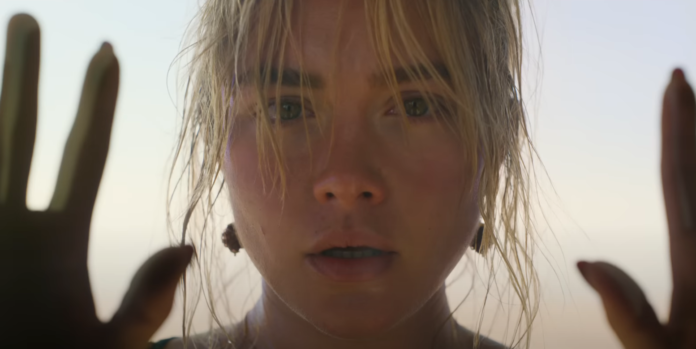 There have been a lot of hysterics surrounding Olivia Wilde’s anticipated Booksmart followup, the ambitious thriller Don’t Worry Darling. Beyond all of the on-set headline-grabbing reports of beef between Wilde and star Florence Pugh, supposed reasons why Wilde fired problematic ex-star Shia Labeouf, and a supposed loogie fired from the mouth of Harry Styles towards fellow co-star Chris Pine. It’s all ridiculous and pointless. But they’re not alone. There were also premature expectations of the film as a possible Oscar contender. The cast and release seem to justify it. But ultimately, Wilde’s film doesn’t reach lofty awards season heights, and only works when you set such things aside.

The imminently watchable Florence Pugh plays Alice, who along with her seemingly perfect businessman husband Jack (Styles) live an idyllic existence in a virtual paradise, a 1950s-style suburban community known as Victory.  In this place, the men wear the pants in the family. Literally. Alice mostly prances around in nothing other than one of her husband’s oversized shirts, when the two aren’t climbing all over one another. It’s safe to say the other households are much the same. At precisely the same time each day, the men, dressed in their business suits and carrying their suitcases, drive off into a roadless desert to a faraway mountain to do their important work. The women stay home, cook, clean, gossip, drink, pay modest attention to their kids, and basically wait for the men to come home.

But there’s something not right about this place, besides the rigidly-defined gender roles. Pine makes an attempt at being an enigma as Frank, the Victory CEO who speechifies to his community every single day. He preaches about “freedom” and the great work they are doing. It all sounds vaguely like a President rallying the people for war, with the men away on the battlefield and the women expected to do their part on the homefront. But when one of the few Black women, Margaret (Kiki Layne) suddenly starts to talk back, questioning what is really going on at Victory, she is quickly disappeared and Alice, who also saw something she wasn’t supposed to, must uncover the truth.

Wilde, working again with Booksmart writer Katie Silberman, has a lot on her mind about female subjugation, a particularly strong theme given current events, but also gaslighting, the patriarchy, and the false idea of the perfect nuclear home. And for the majority of Don’t Worry Darling, the story works at weaving these ideas into a compelling thriller along the lines of The Stepford Wives. Set alongside modern considerations, the chic ’50s motif that Wilde and cinematographer Matthew Libatique employ is particularly powerful, revealing the truth of the facade in an ominous fashion. All the polish in Victory can’t hide the rot underneath, and there’s a sense of dread that only escalates as Alice falls deeper into the conspiracy.

Speaking of which, Pugh is absolutely brilliant. Shocker, I know. She’s once again singularly amazing in the role of Alice. It’s a more complicated role than thrillers of this type generally demand. Pugh captures the inner conflict within Alice as she fights to learn the truth while yearning for the perfect life she once had. She can’t have both, so which will she ultimately choose? For a while, it’s up in the air how that’ll turn out.

If only the rest of the supporting cast had as much to chew on. Alice’s neighbors are portrayed by Nick Kroll, Gemma Chan, Douglish Smith, Kate Berlant, Ari’el Stachel, and a fairly creepy Timothy Simons as the town doctor. Their roles are designed to be limited, in a way, so it’s sorta unfair to judge them for not having much to do. It’s true, though, that this film belongs to Pugh and Styles who have good chemistry as their characters follow a similar arc.

The big disappointment with Don’t Worry Darling is that all of the build-ups leads to a very unsatisfying sci-fi twist that devalues everything that happened before. These big mystery box thrillers are tough to pull off under the simplest of circumstances, but when the film is as message-heavy as this one, including a swerve that compliments it thematically is even tougher, and Don’t Worry Darling doesn’t hold up.

Even though the payoff doesn’t work, Don’t Worry Darling is still a well-crafted thriller with a lot to say and an incredible lead performance by Florence Pugh. Much like Victory itself, this seemingly can’t-miss movie has a fundamental flaw, but it’s still a pretty enjoyable place to visit.