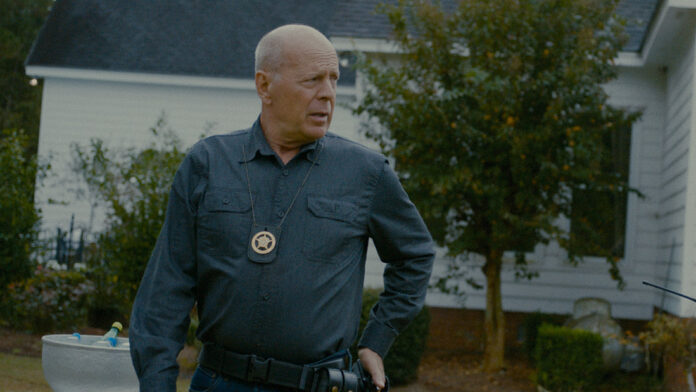 Roy (Rob Gough) is finally out of prison after 10 long years in American Siege. Shortly before he was arrested, his girlfriend Bridget Baker disappeared. Of course, he was blamed for the crime, but swears his innocence. His emotions did get the best of him, and he made some decisions that got himself locked up. With his freedom intact, he is out to get to the bottom of what happened to Bridget. Bridget’s sister Grace (Anna Hindman) and brother Toby (Johann Urb) are still looking for closure as well. Now that Roy is out of prison, the three of them can solve the mystery. 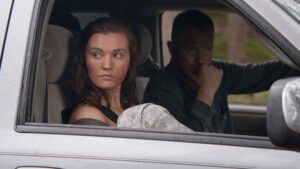 The first stop is to see Dr. John Keats (Cullen G. Chambers). Dr. Keats was the last person known to have seen Bridget alive. Strangely Dr. Keats has a security detail and giant panic room. Roy and the Bakers take the doctor hostage. They want to get sheriff Watts (Bruce Willis) and mayor Charles Rutledge’s (Timothy V. Murphy) attention. Sheriff Watts is a burned-out former NYPD officer who is now Rutledge’s lapdog. Rutledge runs the town and is as corrupt as they come. Not only does he have Sheriff Watts on a short leash, but his son Kyle (Trevor Gretzky) is also on the force. Rutledge pushes Watts to end the hostage situation as quickly and forcibly as possible. Watts starts to wonder what Rutledge is so afraid of coming to light. 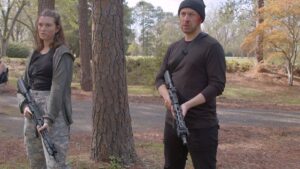 American Siege is directed by Edward Drake who also wrote the film with Corey Large. Drake, Large, and Willis have collaborated on numerous films in the past. One would think this would lead to Drake being able to get the best from Willis. Unfortunately, that is far from the case in American Siege. American Siege serves as a reminder to how far Willis has fallen. The preeminent notion that Willis has mailed it in and will take any project is only strengthened by American Siege. His performance is lackluster at best. Willis’s acting is incredibly stiff and seems to be him simply reciting lines, no real acting to be detected. 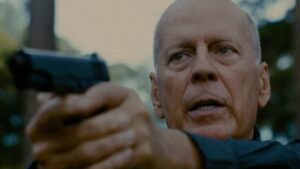 Willis was not nearly the only problem with American Siege. While his performance was subpar, it was far from the only one. In fact, the acting across the board left a lot to be desired. The only difference is more is (or used to be) expected from Willis. On one side, Willis is coasting through the film, on the other – overacting galore. It becomes almost comical. Drake and Large’s script does have some genuinely humorous moments, but they are few and far between. The action is bloody and comes in violent spurts. American Siege does nothing to stand out or make itself memorable. This run-of-mill action is simply not worth the watch.