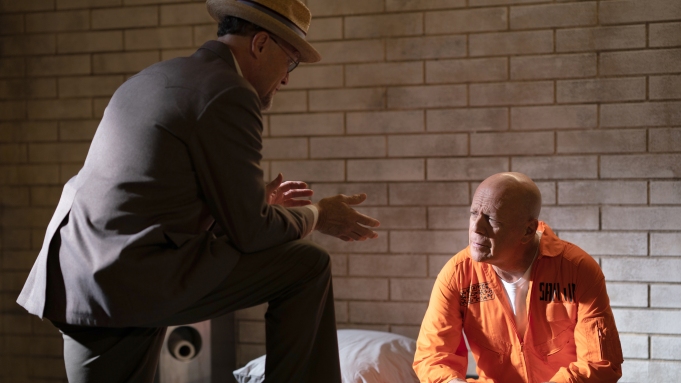 Hollywood and the many fans of Bruce Willis are still reeling at the actor’s retirement and circumstances behind it, but we haven’t seen the last of him yet. Willis stars in Tubi’s adaptation of supervillain graphic novel, Corrective Measures, alongside Guardians of the Galaxy and The Suicide Squad star Michael Rooker. Haven’t heard of this one? I had forgotten all about it when Tubi picked it up last year, and now the trailer is here and, for obvious reasons, is drawing a great deal of attention.

The film by director Sean O’Reilly (When Calls the Heart) is set in San Tiburon, a maximus security penitentiary holding the most dangerous supervillains in the world. Willis plays Julius “The Lobe” Loeb, a super-genius with a hidden fortune that the crooked Warden Devlin (Rooker) will stop at nothing to get, even as tensions reach a fever pitch within the prison.

Willis is no stranger to the world of superheroes and villains, having starred in M. Night Shyamalan’s Unbreakable trilogy. I feel like his fans always wanted to see him do more stuff in that realm and hopefully this film is what they’re looking for.